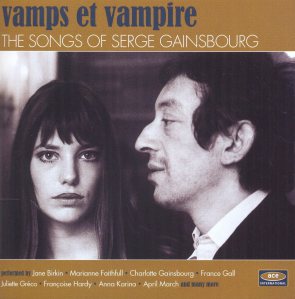 When considering Serge Gainsbourg (1928-1991), it’s often impossible to separate the provocateur’s art from his outré behavior.  The French songwriter, poet, actor and director was described by one journalist as “David Bowie, Mick Jagger and John Lennon rolled into one smoke cloud of controversy,” but it’s hard to imagine any of those rock icons at their most outrageous ever releasing anything like Gainsbourg’s duet with Jane Birkin, “Je t’aime…moi non plus.”  The song’s odd amalgam of steamy, erotically breathy lyrics and exclamations over an easy listening instrumental was quintessentially Gainsbourg, though the artist’s musical repertoire also encompassed jazz, rock and roll, disco, new wave, ye-ye pop and even the (more or less) traditional chanson.  And for all the envelope-pushing subject matter of his songs, his lyrics were literate, intricate and frequently poetic.  Gainsbourg has joined the illustrious ranks of Ace’s Songwriters series with the recent release of Vamps et Vampire: The Songs of Serge Gainsbourg.

Gainsbourg biographer Alan Clayson introduces this 25-track anthology with an essay posing the question, “Was he a misunderstood genius whose daring vulgarity, intricate double entendres and negative love ballads were relevant contributions to Gallic performing arts, or a cynical old lecher who was, as he said himself, ‘only interested in eroticism and money (in that order)?’”  Perhaps Serge Gainsbourg was both, but Vamps et Vampire allows his musical legacy to receive proper reevaluation removed from the salacious (if entertaining) episodes that made him such a constant presence in the French headlines over the years.

All but eight of the tracks here date from Gainsbourg’s prolific work in the (very) swinging sixties 1960s, with the collection rounded out by five songs from the 1980s, one from the 1970s and two from the 1990s.  As the title indicates, every track is performed by a female artist including the two most closely associated with Gainsbourg: his flames Brigitte Bardot and Jane Birkin.  Gainsbourg’s relationship with France’s greatest-ever sex symbol Bardot was short-lived, but produced memorable music including this collection’s “Harley Davidson” and “Contact,” both arranged by the esteemed Michel Colombier.  (Bardot duetted with Gainsbourg on the original “Je t’aime,” but it remained unreleased until 1986; Ace’s compilation pointedly overlooks the track in any version.)  Birkin, the Swingin’ London icon, actress and onetime Mrs. John Barry, enjoyed a relationship with Gainsbourg from 1968 through 1980 during which time they teamed up to produce some of the most remarkable work of their musical careers including his much-acclaimed 1971 concept album Histoire de Melody Nelson.  Birkin is heard here on 1969’s “Jane B” and 1983’s “Con c’est con ces consequences.”

After the jump, there’s more Serge, including the full track listing with discography!

Other Vamps here are equally familiar whether from the recording studio or the worlds of stage and screen: Marianne Faithfull (“Hier Ou Demain”), Nana Mouskouri (“Les Yeux Pour Pleurer”), Juliette Greco ( the breathy “Strip-Tease” and gently poetic “La Javanaise”), Vanessa Paradis (“Tandem”), ballet star Zizi Jeanmaire (“Vamp et Vampire”), actresses Isabelle Adjani (“Pull Marine”) and Catherine Deneuve (“Overseas Telegram”), and even France’s most beloved female singer-songwriter, Françoise Hardy (the groovy “Comment Te Dire Adieu” and “L’Anamour”).  As Gainsbourg himself was involved in so many different art forms, it’s no wonder that he was attracted (in every sense of the word) to artists comfortable in many disciplines.  Serge and Jane Birkin’s daughter Charlotte Gainsbourg has established herself as a successful actress and singer, following in the footsteps of her parents.  She controversially made her music debut with Serge’s song “Lemon Incest,” scandalously performed by father and underage daughter, and two years later in 1986, he penned the album Charlotte For Ever for her, from which “Elastique” is extracted here.

Serge Gainsbourg will, of course, be remembered for many of his wildest televised stunts, such as setting a 500-franc note ablaze or appalling the young Whitney Houston by telling her exactly what he’d like to do with her behind closed doors.  But Vamps et Vampire preserves a cross-section of his most enduring music in one lavishly-designed, generously annotated and splendidly remastered package, making it clear why his songs still appear on programs such as Mad Men and influence artists ranging from Arcade Fire to Belinda Carlisle.  Notes in the 24-page booklet are by Alan Clayson, Mick Patrick and Elinor Blake, while remastering chores have been handled by Nick Robbins.

Vamps et Vampire is available now, and can be ordered at the links below!  And English-only listeners needn’t be reluctant to check this title out – Gainsbourg’s melodies were frequently as delicious as his lyrics were risqué!