How lucky can one guy be...

Dean Martin is said to have once observed that the two smartest decisions he ever made were partnering with Jerry Lewis...and breaking up with Jerry Lewis.  When the split occurred, Martin was 39 years old, but convinced that a successful solo career was still ahead of him.  Was he ever right!  The former Dino Paul Crocetti was among the lucky few to have a successful second act in showbiz, and his career as just Dean Martin even eclipsed the first act as one-half of the beloved Martin and Lewis team.  Martin first took flight as a singer at Capitol Records beginning in 1948, eight years before dissolving his partnership with Lewis.  He remained at the Tower through 1961, making his final recordings there in December of that year.  On February 13, 1962, he entered United Western Recorders on Hollywood's Sunset Boulevard to begin his tenure alongside pal Frank Sinatra as one of the flagship artists for the Chairman's Reprise Records label.  Over the years, Martin's Reprise catalogue has changed hands numerous times, and last week, it was officially announced that its new home will be Sony's Legacy Recordings.

In partnership with The Dean Martin Family Trust, Legacy has begun remastering titles from Martin's Reprise (1962-1974) and Warner Bros. (1983) periods for an ongoing reissue campaign.  The first title to emerge under the Legacy deal was the recent Playlist: The Very Best of Dean Martin, which was newly remastered by Vic Anesini.  The Reprise period, of course, includes many of Martin's most enduring hits.  He famously took on The Beatles - and triumphed! - in 1964 when Ernie Freeman's contemporary arrangement of "Everybody Loves Somebody," a 1947 song by Sam Coslow, Irving Taylor and Martin's frequent collaborator Ken Lane, knocked the Fabs' "A Hard Day's Night" right off the No. 1 spot on the Billboard 200 at the height of Beatlemania!  Despite Dino's protestation that "I do not like rock singers, rock is out with me, I can't stand rock," Freeman's heavy rock-influenced backbeat gave Martin the edge to introduce his laid-back croon to a new generation. 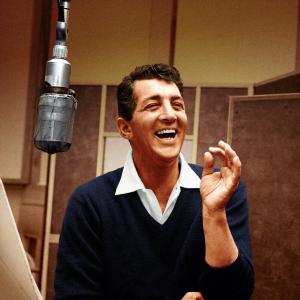 More major hits followed including "I Will," "The Door is Still Open to My Heart" and Lee Hazlewood's "Houston," and by the beginning of 1966, Martin had notched seven Top 40 pop hits and six Top 40 albums - in addition to juggling the demands of his popular variety show!  Dino remained with Reprise for most of the rest of his recording career.  Even considering the seismic shifts in musical styles as the sixties continued, Martin's hits hardly waned, with "In the Chapel in the Moonlight" and "Little Ole Wine Drinker Me" both going Top 40 in 1967.  When Reprise issued two greatest-hits collections in 1968, both achieved gold status.  In 1971, he re-signed with the label for another three-year contract, and in 1974, he would record his final music for the House That Frank Built although legal wrangling would prevent the songs' release until 1978.  Martin gracefully bowed out of the recording business, smartly refusing to subject himself to disco and other styles that affected the music of so many of his contemporaries.  Not that Martin completely avoided pop and rock in his years at Reprise; quite to the contrary.  He recorded songs by Jimmy Webb, Burt Bacharach and Hal David, Tommy Boyce and Bobby Hart, The Bee Gees, Kris Kristofferson, John Hartford, Tony Hatch and Jackie Trent, Carole King and Gerry Goffin, and even Smokey Robinson.  Martin also built up a considerable catalogue of country music at Reprise.

Dino continued to appear on television and onstage during his retirement from the recording studio, and in 1980 purchased back his Reprise recordings from the label (which had itself purchased fourteen albums from Dean in 1971).  Yet most of these albums remained incredibly difficult to find in the CD era until the release of Bear Family's definitive complete Dean Martin series of box sets (four, in total, with two each dedicated to Capitol and Reprise) and Collectors' Choice's series of Reprise two-fers.

In 1983, Martin was coaxed by his longtime producer Jimmy Bowen, head of Reprise parent Warner Bros.' Nashville division, to record one more album.  My First Country Song became a respectable No. 49 entry on the Country Albums chart, and its title track - a duet with Conway Twitty - also became a Top 40 country hit.  Though the album would turn out to be Martin's last, he did record one last song, "L.A. is My Home," which was released in 1985 on the MCA label.  (It was also the closing theme song to the television show Half Nelson on which Dean appeared.)  There's no mention of whether "L.A." is included in the current Legacy deal.

What can you expect from Legacy's Dean Martin series?  Hit the jump!

The digital-only initiative for Martin began with the reissue of 1966's The Dean Martin Christmas Album and a "2-disc," 40-song collection entitled The Reprise Years with one volume dedicated to "The Greatest Hits" and one to "The Best of the Rest."  In addition, ten remastered Reprise albums (out of 27, including two Greatest Hits LPs) are now available digitally from Legacy:

Though no further information on future releases is available at this point, Legacy's press release indicates that all Reprise recordings are being remastered "with an eye toward releasing the catalogue digitally and physically over the course of the next year."

What would you like to see Legacy do with Dino's catalogue?  Sound off below!  And rest assured, future updates on the King of Cool's legendary Reprise output will be forthcoming, and you'll be able to read about them right here at The Second Disc!  Now ain't that a kick in the head!

(*) denotes certified gold album (most of which sold over 1,000,000 units, though there was no platinum certification at the time)