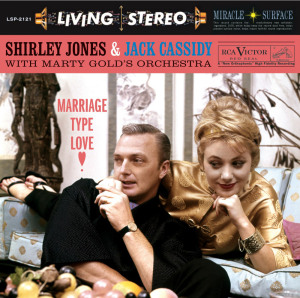 Sony's Masterworks Broadway division has announced its spring slate, and it's filled with surprises. The label is kicking it off with next week's first-ever release of a shelved album from Shirley Jones and Jack Cassidy recorded in 1959 and unreleased until now, and following that in May with the first-ever reissue of a "lost" Richard Rodgers score written for television. That gem, Androcles and the Lion, will be followed in June by a pair of albums from one of its stars: Ed Ames, formerly of the Ames Brothers.

In her 2013 memoir, Academy Award winner and Partridge Family matriarch Shirley Jones chronicled her rocky marriage to the debonair, troubled Broadway star Jack Cassidy. Though the couple broke up before his untimely death in 1976, Jones concluded, "Both [her companion of 36 years] Marty [Ingels] and I know the truth: I still love Jack Cassidy, and I will carry on loving him until my dying day." In 1959, the love they shared was in full bloom. The bright young couple had recorded a pair of albums for Columbia Records in 1957 and 1959 (Speaking of Love, with Percy Faith's orchestra; and With Love from Hollywood, with Frank DeVol's orchestra). Also in 1957, they co-starred in a studio cast recording of Brigadoon that remains among the score's finest renderings. In 1959, they announced a new duet album, to be entitled Marriage Type Love after the Rodgers and Hammerstein song from the musical Me and Juliet. Yet for reasons that are still unclear today, the mixed and completed LP was shelved.

Now, after more than fifty years, Marriage Type Love is being unveiled on digital download and CD-R from Masterworks. The 12-song set features Marty Gold and His Orchestra backing up the on this loose concept album built around the themes of love and marriage. In addition to the Sammy Cahn/Jimmy Van Heusen tune "Love and Marriage" (best known to one generation as the theme song to television's Married...with Children), the album contains showtunes and standards by Frank Loesser, Rodgers and Hammerstein, Rodgers and Hart, George and Ira Gershwin, and Cole Porter. Marriage Type Love will be released exclusively for purchase via MasterworksBroadway.com on April 15 in a limited quantity of Manufacture-On-Demand CD-Rs as well as digital download. The CD-R gets wider release through Arkiv Music on May 13, and downloads through other digital service providers will become available the same day.

After the jump: full details on Androcles and the Lion and the Ed Ames two-fer! Plus: track listings for all titles!

Based on George Bernard Shaw's 1912 play, the 1967 television special Androcles and the Lion brought to life the story of Androcles, a Christian tailor whose friendship with a lion saves himself and his friends from martyrdom in the days of Ancient Rome. Peter Stone (1776, The Will Rogers Follies) penned the teleplay, and Richard Rodgers provided both music and lyrics, as he had for the Broadway musical No Strings. Norman Wisdom (Walking Happy) led the cast as Androcles, with the great Noël Coward as Caesar. The broadcast also featured singing star Ed Ames as well as John Cullum (currently on Broadway in the new play Casa Valentina), Brian Bedford, and Inga Swenson.  The RCA Victor soundtrack recording of Androcles and the Lion is receiving its first-ever reissue in any format from Masterworks on May 13 in a limited quantity of MOD CD-Rs as well as digital download. The CD will be available through Arkiv Music on June 10, plus downloads through digital service providers the same day.

The music of Broadway has long been a staple in the repertoire of vocalist Ed Ames, once described by director George Abbott (Damn Yankees, The Pajama Game) as possessing one of the finest voices he had ever encountered. Ames took Harvey Schmidt and Tom Jones' ballad "Try to Remember" from The Fantasticks to the Adult Contemporary Top 20 in 1965; two years later, he took the same team's "My Cup Runneth Over" from their musical I Do! I Do! to the top of the AC chart and the Top 10 of the Pop survey.  Though Ames recorded more than twenty albums in roughly a decade at RCA, very few of his albums have made it to the CD format. Masterworks rectifies that with the reissue of two of those LPs.

1964's Opening Night, a collection of songs from Broadway, was the former Ames Brother's first RCA Victor solo recording and includes "Try to Remember" as well as songs by Lerner and Loewe, Anthony Newley and Leslie Bricusse, Frank Loesser and Lionel Bart. In 1966, he returned to the theatre songbook with More I Cannot Wish You, named after Loesser's Guys and Dolls song. Another collection of Broadway favorites (for the most part), it includes "The Impossible Dream" from Man of La Mancha, "Climb Ev'ry Mountain" from The Sound of Music and a pair of tunes from Jerry Herman's Mame. Opening Night / More I Cannot Wish You, available together for one price, will be released exclusively for purchase via Masterworks on June 17 in a limited quantity of MOD CD-Rs as well as digital download. The CD-R will be available through Arkiv Music on July 14, plus downloads through digital service providers the same day.