In every job that must be done
There is an element of fun
You find the fun, and - SNAP!
The job's a game! 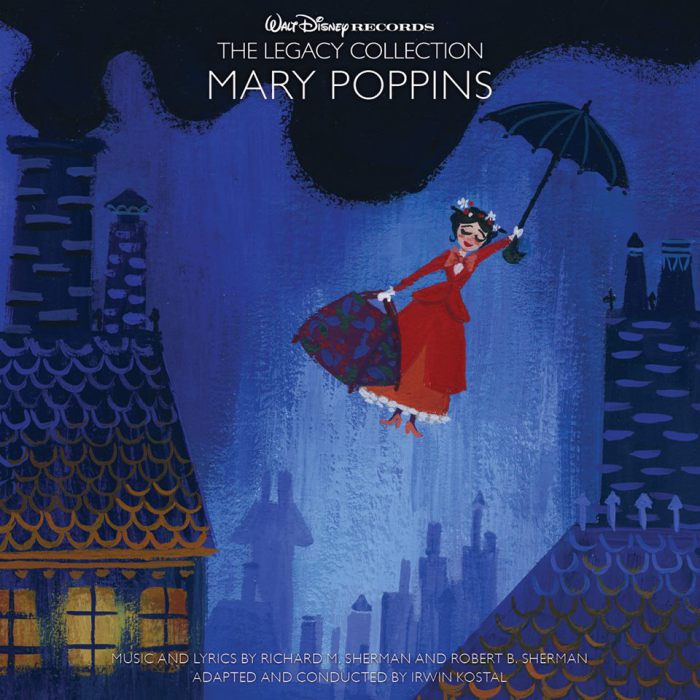 There's certainly an element of fun in catalog music, particularly catalog soundtracks, particularly the somehow oft-ignored discography of The Walt Disney Company. Disney's somewhat passive approach to a catalog initiative (tempered by their licensing deal with the Intrada label) finally made an about face this spring with the announcement of several titles in "The Legacy Collection": expanded anniversary editions of classic Disney film soundtracks with gorgeous artwork to match. The Lion King was the first title in the line, released this week, and August will see the release of the next: a 50th anniversary edition of the music to Mary Poppins.

As dramatized in last year's Saving Mr. Banks, Walt Disney was an unabashed fan of P.L. Travers' series of children's books about a magical nanny. Travers was reticent to allow her books to be adapted, but ultimately allowed Disney to pursue the idea. The result, though somewhat deviated from the books, was pure Disney magic: Julie Andrews (star of My Fair Lady and Camelot on Broadway but untested enough onscreen to be replaced for the My Fair Lady film adaptation by Audrey Hepburn) as the practically perfect heroine, bona-fide TV star Dick Van Dyke as the everyman/one man band/pavement artist/chimney sweep Bert, great supporting turns by David Tomlinson, Glynis Johns and Ed Wynn, a stunning multimedia presentation (that deftly mixed live action with animation in several key sequences)...and the songs.

Brothers Richard and Robert Sherman were already known quantities in both the songwriting world ("You're Sixteen") and on the Disney backlot (Annette Funicello's Top 10 hit "Tall Paul," simple, singable and sincere tunes for 1964 World's Fair and Disneyland attractions) when Walt asked "the boys" to compose a song score for Poppins. But who could have imagined just what a triumph it would be? With instant standards like "A Spoonful of Sugar," "Jolly Holiday," "Supercalifragilisticexpialidocious" (a song this author is proud to have typed from memory) and "Feed the Birds (Tuppence a Bag)" - a song that Walt would often ask the Shermans to play for him, just because - Mary Poppins remains one of the brightest works of art in the Disney canon. Ultimately, the film won five Oscars, including two trophies for the Sherman Brothers and one for Julie Andrews, winning Best Actress over - you guessed it - Audrey Hepburn in My Fair Lady. (Disney passed away in 1966, leaving Poppins as the company's last major work he lived to see to completion.)

So how is Disney's Legacy Collection celebrating this soundtrack masterpiece? Hit the jump to find out!

While the Legacy Collection version of The Lion King was a two-disc affair, Poppins will be featured across three discs. Much of this material has been heard before: Discs 1 and 3 (featuring vintage story conferences between the Shermans, musical director Don DiGradi and author Travers, plus interviews with cast and crew) were in fact released as a handsome 40th anniversary edition in 2004. But Disc 2 features some very exciting treats for fans: 15 "pre-demos" recorded by the Shermans during pre-production of the film, including a handful of songs that never made it to the final film. (A smattering of these recordings were heard on the deluxe edition of the film score to Saving Mr. Banks.) Additionally, seven of the unused tracks have been re-recorded as "Lost Chords" versions - intriguing full arrangements of the tracks with talented voice actors to imagine what final film versions might sound like. Several songs will be immediately familiar to longtime Poppins fanatics, including favorite demos "The Eyes of Love," "The Chimpanzoo" and "The Land of Sand," which was rewritten and repurposed for 1967's The Jungle Book. The disc will close out with the rare original LP version of the film's overture.

The Legacy Collection of Mary Poppins looks to brilliantly continue this exciting product line when it's released August 26. Pre-order links are now active, and the official track list is below.