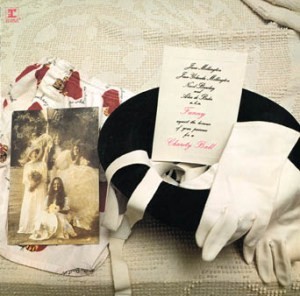 We've got an overview of Real Gone's typically diverse set of reissues for September.  Included are two albums by groundbreaking rock band Fanny, the solo debut of guitarist Jesse Ed Davis, a new pressing of a Spacehog album, and the vinyl debut of Powerman 5000's breakthrough album.  In addition, the label continues its series of Grateful Dead live reissues.  All of these titles are due in stores tomorrow, September 9.

First up are two albums from Fanny.  When Richard Perry signed the group to Reprise in 1969, they became the first all-female rock band signed to a major label.  The foursome (June Millington - guitar, Jean Millington - bass, Alice De Buhr - drums, and Nickey Barclay - keyboards) released their debut, self-titled album in 1970, produced by Perry.  They soon created a buzz around Los Angeles which led to television appearances, session work and opening for acts such as Slade, Jethro Tull, and Humble Pie.

The band released their second LP, Charity Ball (adorned with a cover photo by actress Candice Bergen), in August, 1972.  Produced again by Perry, the eleven-song set featured all original music with the exception of a cover of Stephen Stills' "Special Care."  The group would notch their biggest hit on Reprise when the title track climbed to No. 40 on the Billboard chart.

A few months later, in February, 1972, Fanny Hill hit store shelves.  Recorded at Apple Studios in London, Perry was back in the producer's chair, joined by Beatles associate Geoff Emerick as engineer.  Fanny was also joined by Rolling Stones sidemen Bobby Keys and Jim Price on a couple of tracks.  The majority of the material was still self-written, but two covers were included: a version of The Beatles' "Hey Bulldog" and a Latin-influenced take on Marvin Gaye's "Ain't That Peculiar" which hit No. 85 on the Billboard Hot 100.

But the end would soon come for Fanny.  They released their next album in 1973, produced this time by Todd Rundgren.  But June Millington left the band soon after, shortly joined by Alice De Buhr and the group then left Reprise.  With a new line-up, they signed with Casablanca and released one LP in 1974.  However, the band broke up not too long afterward.  June and Jean Millington tried to revive Fanny with a whole new line-up and tour in 1975, but that effort failed to gain much traction when they resisted playing Fanny's older output.  Three of the four members would perform a reunion concert in 2007 and a spin-off project in 2018.  Fanny Walked the Earth saw the Millington sisters join drummer Brie Howard-Darling.  A documentary was released in 2021 about the group and they have influenced many later acts including The Go-Go's, The Bangles, and The Runaways.

Real Gone has reissued the Fanny catalogue before, including expanded CD reissues of the group's four Reprise albums from 2013-2016 and a vinyl reissue of Fanny in 2020.  Now they are giving the second and third albums their first-ever vinyl reissues.  Charity Ball features a lyric sheet and comes on ruby red vinyl, limited to 2,000 copies.  Fanny Hill, in time for its 50th anniversary, features a lyric sheet and comes on milky clear vinyl.  It is also limited to 2,000 copies.

Guitarist Jesse Ed Davis began his musical career in Oklahoma in the late 1950s.  The Native American would move to California in the 1960s.  He became friends with Levon Helm, who introduced him to Leon Russell.  This led to session work and eventually joining Taj Mahal.  Staying with the band for their first four albums, he joined Atco as a solo artist and released his first solo album in 1971.  Jesse Davis features four tracks, including five tracks written by Davis and three covers (songs by Pamela Polland, Roger Tillison, and Van Morrison).  Davis was joined on the album by artists including Leon Russell, Eric Clapton, Gram Parsons, Merry Clayton, Ben Sidran, John Simon (producer of The Band), Alan White (of Yes), and Delaney Bramlett behind the mixing desk.

Jesse Davis would record on more album for Atco, 1972's Ululu.  He then moved to Epic for one album in 1973.  But that was pretty much the end of his solo career.  However, he remained a very much in-demand sideman and played with a who's-who of musical superstars until his passing in 1988.  He was inducted into the Oklahoma Jazz Hall of Fame in 2002 and the Native American Music Hall of Fame in 2018.

It would be three years before their next full-length project, The Chinese Album hit shelves in March, 1998.  Originally written to be the soundtrack to a film the band was developing.  However, dissatisfied with the script, the movie was scrapped and the album went forward.  The Chinese Album was a bit less glam than its predecessor, influenced more by Badfinger, The Kinks, Queen, and R.E.M. (Michael Stipe even makes an appearance on the track "Almond Kisses").  But perhaps with the three-year gap between albums, the band's momentum had lessened and The Chinese Album disappointed sales-wise.  They were released from Sire and moved to smaller label Artemis Records for their third album in 2001.  The group's members then moved on to the other projects before reuniting for a few live shows in 2008 and another album in 2013.

Real Gone originally brought The Chinese Album to vinyl in 2020.  This new repress comes on pink vinyl and features the same 4-page insert as the original pressing.

Next comes the breakthrough album from Powerman 5000: 1999's Tonight the Stars Revolt!.  The band was founded in 1991 by Spider One (whose real name is Michael Cummings and is the younger brother of Rob Zombie).  The group has had many members over the years with Spider One being the constant presence.  The band signed with DreamWorks Records in 1995, and their breakthrough would come four years later.  Tonight the Stars Revolt! is a mixture of science-fiction and "Action Rock."  (The title comes from a 1952 pulp story written by comic book legend Gardner Fox.)  It would sell over a million copies and spawn the hit singles "When Worlds Collide" and "Nobody's Real."  Follow-up album Anyone For Doomsday? would end up being cancelled and lead to legal issues.  But the group persevered and continues to today with their last album, The Noble Rot, being released in 2020.

Real Gone is bringing the album to vinyl for the first time.  The package replicates the original CD artwork on the jacket and inner sleeve and features matte-finish printing.  It comes on Coke clear with yellow swirl vinyl.

Real Gone is also continuing their series of Grateful Dead reissues, bringing the previously limited-edition titles to general retail for the first time.  This installment is Road Trips Vol. 1, No. 2: October '77.  These performances on this 2-CD set come only a few months after the release of Terrapin Station, their ninth studio album, the first on Arista, and first after a nearly two-year absence from touring.  Cherry-picked from three gigs (10/11/77 in Norman, Oklahoma; 10/14/77 in Houston; 10/16 in Baton Rouge), this Road Trip offers a 10-minute rendition of "Let It Grow" from Norman, a 17-minute "Sugaree," and a 13-minute version of "Black Peter," hailing from the Baton Rouge show.  In addition, the Houston excerpt captures the last time the "Help on the Way"/"Slipknot!"/"Franklin's Tower" medley was played for six years. A 16-page booklet featuring notes by Steve Silberman accompanies this "Betty Board" recording, mastered by Jeffrey Norman and presented in HDCD sound.  As is the norm with these Real Gone general retail releases, the third bonus disc offered with the limited release in 2008 is not included.

If you would like to give any of these titles a try, we've got the full tracklistings and ordering links below.  They are all being released tomorrow, September 9.

Entertainment historian and writer Randy Fairman is a graduate of Northwestern University. Randy has written for publications including University Reporter Chicago and co-authored the graphic novel Love Bytes. A native of Indiana, he currently resides in New Jersey.