On October 5, 1969, Monty Python's Flying Circus appeared on TV for the first time, and their unique brand of sketch- and music-based comedy has since become an indelible part of our culture. To celebrate their 50th anniversary, the surviving members of Monty Python will launch re-releases of their films and their landmark television series. They've also begun to revisit their classic albums with recently released reissues of Monty Python's Previous Record, Live At Drury Lane, The Album Of The

END_OF_DOCUMENT_TOKEN_TO_BE_REPLACED

George Harrison would have been 75 years old next month, and Craft Recordings is celebrating that milestone with the ultimate tribute to the former Beatle: a multi-format reissue of 2002's Concert For George. Available February 23, two days before Harrison's birthday, Concert For George will bow in five different physical configurations - the most enormous of which is an online-only box set, limited only to 1,000 copies worldwide and featuring the star-studded tribute show on two CDs, two

END_OF_DOCUMENT_TOKEN_TO_BE_REPLACED 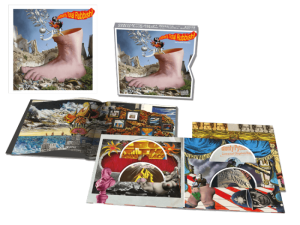 Here's something that'll hit your doorstep like a giant animated foot: Virgin is releasing a CD and vinyl box set of albums by the iconic comedy troupe Monty Python. The classic BBC comedy sketch series, which ran from 1969 to 1974 and made stars of John Cleese, Eric Idle, Terry Gilliam, Graham Chapman, Terry Jones and Michael Palin, has had an immeasurable influence on pop culture ever since, from films (Monty Python and The Holy Grail, Monty Python's Life of Brian, Monty Python's The Meaning