Whether performing with Elf, Black Sabbath, Rainbow, Heaven and Hell, or his own band, Dio, Ronnie James Dio (1942-2010) thrilled with his powerful voice and indomitable spirit.  One of the most influential hard rock and metal singers of all time, Dio would have turned 80 years old on July 10.  Rhino is remembering him with a 4-CD super deluxe edition of the band Dio's debut, 1983's Holy Diver.  The box arrives in stores on July 8, just two days before Dio's 80th. Holy Diver united Ronnie, on

END_OF_DOCUMENT_TOKEN_TO_BE_REPLACED

Ozzy Osbourne was a tough act to follow, but Ronnie James Dio more than filled his shoes when he took over the frontman role in Black Sabbath for the metal pioneers' 1979 album Heaven and Hell.  On March 5, Rhino will salute the Dio era with deluxe 2-CD or 2-LP reissues of both Heaven and Hell and its 1981 follow-up, Mob Rules. When it became clear that Black Sabbath couldn't proceed with its original lead vocalist, Ozzy Osbourne, Ronnie James Dio (Elf, Rainbow) was paged.  Dio was introduced

END_OF_DOCUMENT_TOKEN_TO_BE_REPLACED

A poem written for children in 1802 would not have been the most obvious subject for Deep Purple bassist Roger Glover for tackle, but that's precisely what he did in 1974 with The Butterfly Ball and the Grasshopper's Feast.  Glover wrote, produced, and played on the pop/rock opera concept album which yielded the hit "Love Is All," sung by Ronnie James Dio.  Now, that original album has been expanded to 3 CDs for a new box set from Cherry Red's newly-reactivated Purple Records imprint. In

END_OF_DOCUMENT_TOKEN_TO_BE_REPLACED

"We played it hot, hard and heavy at the Carolina County ball/And we sang 'Ooooo'/On a boogie-woogie Friday night..." Ronnie James Dio's early band Elf played it hot, hard and (pretty) heavy throughout its relatively short lifespan.  Elf released three studio albums between 1972 and 1975 before going to superstardom with Rainbow (the core of which was actually built from Elf), Black Sabbath, and Dio.  Last year, Cherry Red released a reissue of 1972's debut Elf; now, the label has turned its

END_OF_DOCUMENT_TOKEN_TO_BE_REPLACED

Who’s that gleefully malevolent-looking elf? Why, it’s none other than the late Ronnie James Dio, legendary frontman of Rainbow, Black Sabbath, Heaven and Hell and of course, Dio. Between 1972 and 1975, Dio (under his real name of Ronald Padavona) led the band Elf for three albums. The first of those LPs, the eponymous Elf, has just been reissued by Cherry Red’s Hear No Evil imprint in a newly-remastered edition. Singer/bassist Dio founded Elf in 1967 as The Electric Elves, alongside

END_OF_DOCUMENT_TOKEN_TO_BE_REPLACED

Our Black Friday Record Store Day shopping list has just gotten a little longer! Following our recent announcement of Legacy Recordings’ slate for November 28, we have news of the offerings coming your way from Omnivore Recordings, Rhino and Varese Sarabande! For the gang at Omnivore, it’s all about amazing indie pop! The label recently reissued Game Theory’s debut album Blaze of Glory, and on November 24, the Omnivores will unveil the first U.S. release of the band’s compilation Dead Center.

END_OF_DOCUMENT_TOKEN_TO_BE_REPLACED 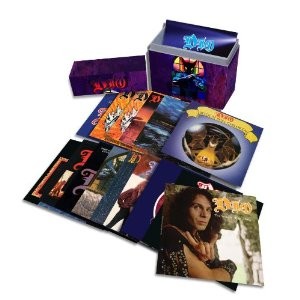 Metal will never die - and neither will the memory of Ronnie James Dio. The late singer will be celebrated with no less than three catalogue projects between now and October. First up, from Universal U.K. comes the Dio Singles Box Set, released last week in the U.K. and available as an import starting this week. The 15-disc set features replicas of all of Dio's Vertigo-era 12" singles, including the Dutch-only "The Last in Line" and French-exclusive Dio Live single, as well as classics like

END_OF_DOCUMENT_TOKEN_TO_BE_REPLACED

Smash!  Boom!  Bang!  The ace compilation experts at, well, Ace Records are offering up plenty of Smash, Boom and Bang (both in impact and in label name!) for your buck with their diverse slate of February releases.  You'll find top-drawer pop, rock and soul for connoisseurs and beginners alike among the label's latest.  Perhaps the most unexpected is the new entry in the label's long-running Songwriters and Producers series.  Smash Boom Bang!  The Songs and Productions of