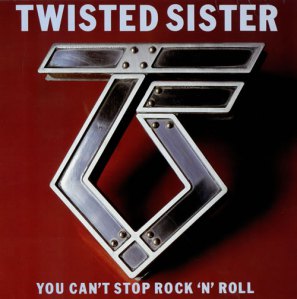 Fans were hoping for a decent set of remasters for the '80s shock-rockers Twisted Sister at some point in the near future. (A previous set of reissues on the Spitfire label were of intensely dubious quality.) Unfortunately, Warner Music Group seems to have bestowed the remaster task not to Rhino but to Eagle Rock Entertainment, who've put out a steady stream of TS product in the past few months.

Now, on January 25, Eagle Rock has another two reissues coming out: the band's sophomore album You Can't Stop Rock 'n' Roll (1983) and the first volume in the Club Daze series from 1999, collating various tracks the band recorded in the decade before being signed to Atlantic Records. These sets have the same track listings as the Spitfire versions (Club Daze was of course only ever released on that label), but one hopes they will be presented in superior quality.

Track lists and order information are after the jump.