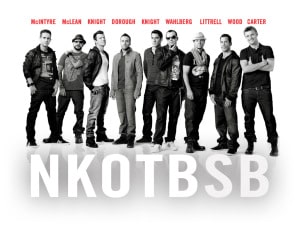 For teenage girls of two different eras, the New Kids on the Block and the Backstreet Boys were the apex of pop music. Both of them were impossibly successful teen quintets created by astoundingly lucky impresarios who had or would soon strike gold with similar acts (NKOTB Svengali Maurice Starr also bought New Edition onto the pop music scene, while now-disgraced BSB producer Lou Pearlman would also make stars out of NSYNC).

When both groups announced late last year that they were collaborating, cross-generational nostalgia among fans was pretty high - and now, as their upcoming tour looms large, we can confirm that there's going to be a compilation to ride that wave of nostalgia, with the release of NKOTBSB in May from Legacy Recordings.

The premise is simple - ten tracks from the band's collective catalogue plus an undetermined amount of new tracks featuring both bands. Those old tracks, however, will be up to fans to determine; enthusiasts can head over to an official site to pick five tracks from each band. The selections are painfully obvious ones - nearly all the selections for both bands are Top 40 hits - but there is an "Other" option for both bands, so perhaps fans might make some surprise choices.

NKOTBSB streets on May 23; in the meantime, we've enclosed the selectable tracks after the jump, along with their discographical info and U.S. chart positions.