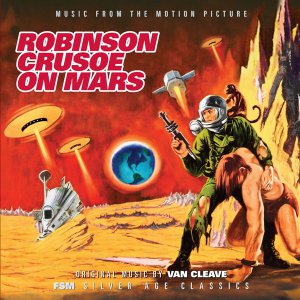 Robinson Crusoe on Mars (1964) is exactly what it sounds like: the Daniel Defoe classic on the surface of Mars. Paul Mantee is the marooned astronaut and Victor Lundin is "Friday," the Martian slave laborer who escapes and befriends him. (Also appearing as Mantee's doomed co-pilot was a pre-Batman Adam West!) The lively, tonal score was composed by Nathan Van Cleave, known for writing more music for The Twilight Zone than any other composer (12 episodes). It's presented complete, newly remixed from the original three-track, 2" masters and is limited to 3,000 copies.

Also in the FSM mix are Americana-filled scores to TV-movies The Homecoming: A Christmas Story (1971) and Rascals and Robbers: The Further Adventures of Tom Sawyer and Huck Finn (1982), each respectively scored by Jerry Goldsmith and James Horner. The former film was notable for introducing small-screen audiences to The Waltons - a series followed for nine years beginning in 1972 - while Rascals and Robbers has a place in Horner's history as not only one of his earliest works, but the last thing before his career took a sudden upswing. Days after finishing that score, he began work on what many consider to be one of his finest musical efforts, Star Trek II: The Wrath of Khan. This two-for-one set is also limited to 3,000 copies, and is presented from the original mono and stereo masters, respectively, stored in the CBS Inc. Film and Television Collection at UCLA Performing Arts Special Collections.

Order pages and track lists are, as always, after the jump!