Giving Them The Best That He Got: Warwick, LaBelle, Bailey Featured on Skip Scarborough Anthology 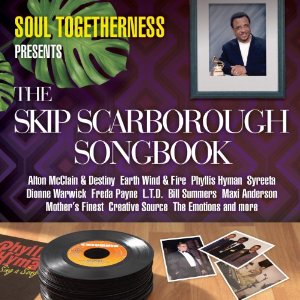 Skip Scarborough (1944-2003) may not have ever gained the name-brand recognition of some of his songwriting peers. But the man born Clarence Alexander Scarborough penned some of the most instantly recognizable classics in the soul music pantheon. Anita Baker's "Giving You the Best That I Got," The Friends of Distinction's "Love or Let Me Be Lonely" and Earth Wind & Fire's "Can't Hide Love" are just three of Scarborough's most memorable compositions. The latter went on to be recorded by Dionne Warwick, Nancy Wilson, Carmen McRae and Patti LaBelle, among others. Until now, though, Scarborough has never been the subject of a career anthology. Expansion Records on April 26 will release The Skip Scarborough Songbook, bringing together 18 soul classics including rare gems and familiar favorites.

The songwriter/producer/arranger had a diverse CV boasting two No. 1 R&B hits: L.T.D.'s "Love Ballad" and Con Funk Shun's "Ffun." He was equally at home with vocalists as well as groups; in the latter category he produced Earth Wind and Fire, Blue Magic, the Emotions and the Los Angeles quintet Creative Source, managed by The 5th Dimension's Ron Townson. Scarborough notably wrote, produced and played on LPs by the late jazz/soul diva Phyllis Hyman, and another diva to benefit from his production expertise was Patti LaBelle. Scarborough supplied LaBelle with "It's Alright with Me" from 1979's Music is My Way of Life, but his biggest hit was Anita Baker's "Giving You the Best That I Got," from the 1988 three-million selling LP of the same name. The single topped the R&B charts and went Top 3 pop, and also won Scarborough a Grammy Award. Despite success with funk, disco and soul, Scarborough never stayed too far away from those artists with jazz leanings; he collaborated with Nancy Wilson through the 1990s on LPs such as Nancy Now!, Lady with a Song, and If I Had My Way.

Hit the jump for the complete track listing with discographical information and a pre-order link!

The Skip Scarborough Songbook is due from Expansion Records, part of the label's Soul Togetherness series, on April 18 in the U.K. and one week later in the U.S. It can be pre-ordered at the link below.