At Their Most Beautiful: New R.E.M. Compilation Announced 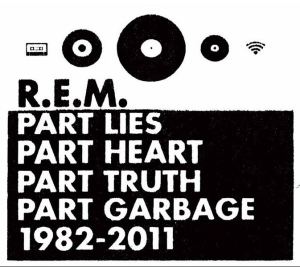 The music world was kind of shocked when R.E.M. announced their breakup. (We even devoted a whole Reissue Theory to their 1987 B-sides compilation Dead Letter Office.) It's certainly interesting timing, then, that the band has one last act of catalogue material before they split: a double-disc compilation coming in November.

Named after a quippy assessment of the band by its own guitarist, Peter Buck, Part Lies, Part Heart, Part Truth, Part Garbage 1982-2011 is the first set from the band to span their career in full - both their heady, pioneering college-rock days on I.R.S. Records as well as their move to further international acclaim on Warner Bros. Naturally, it also includes three new tracks: a new single, the aptly-titled "We All Go Back to Where We Belong" (available to download October 18) and two additional tracks from the sessions to the band's latest album, this year's Collapse Into Now.

It's easy to be cynical about the timing of this release, coming less than a week after the band's split. But the ability to collect the band's full greatest hits in one spot is actually rather neat. The only other Warner compilation on the market is 2003's In Time: The Best of R.E.M. 1988-2003, while the I.R.S. era has been anthologized to death, most recently with 2006's And I Feel Fine...The Best of the I.R.S. Years 1982-1987. (Both sets, in fact, had their own deluxe editions with various rarities here and there.) The song selection is certainly arguable (as it was when we did our own Reissue Theory on a full R.E.M. hits set earlier this year), but the 40 songs herein aren't a terrible place to start.

The package is available November 15 and can be ordered (along with the track list) after the jump.