No sooner did R.E.M. plan a generous digital equivalent of a two-disc set collating nearly all of their B-sides and rarities for I.R.S. Records have the departed Athens quartet - or label Warner Bros., anyway - planned a massive digital bundle of their B-sides for their major label era. Complete Warner Bros. Rarities 1988-2011 features a similar packaging scheme as its I.R.S. comparison, but the scope of time certainly allows for more material - 131 tracks, in fact. The complete claim is not

END_OF_DOCUMENT_TOKEN_TO_BE_REPLACED

With April 19's Record Store Day a little more than a week away, it might be time to start making those checklists! We've already filled you in on exciting releases from Legacy Recordings, Real Gone Music, Sundazed, Omnivore Recordings, Varese Sarabande and many others, but today it's all about Rhino! The Warner Music Group catalogue arm has a bumper crop of more than 25 exclusive offerings from some of the biggest names classic rock, vintage R&B and beyond - including The Doors, Grateful

END_OF_DOCUMENT_TOKEN_TO_BE_REPLACED

A then-unheard of gap of three years stood between R.E.M.'s first two albums for Warner Bros. Records - 1988's Green and 1991's Out of Time - so there's still time to go before the departed band's ongoing 25th anniversary album remaster campaign enters the 1990s. With that, Warner Bros. is instead releasing, for the first time, two complete live sets the band recorded for the beloved MTV Unplugged series. Both sets will first be available in a single, four-disc vinyl box set to be released on

END_OF_DOCUMENT_TOKEN_TO_BE_REPLACED

Let's say you're part of one of the most hotly sought-after bands in the world. You've developed a distinctive style that's set you apart from most of your peers since day one. You've put out five basically flawless albums out in five years, eventually earning yourself a U.S. Top 10 hit and exposure on MTV. And now, a major label wants to sign you. What do you do? The way R.E.M. answered this question on Green, their sixth album and first of many for Warner Bros. Records, is perhaps a gold

END_OF_DOCUMENT_TOKEN_TO_BE_REPLACED

Glen Campbell and Jimmy Webb, In Session (Concord) The legendary songwriter and equally legendary country superstar join forces for two 1988 television broadcasts, joined together on one DVD and accompanied by a CD of the programs' musical selections!  Campbell's only recording of Webb's "Sunshower" can be found here, among other gems.  For those of you anticipating the arrival of In Session today, it appears that this title has been delayed until October 9!  You can read more about it here.

END_OF_DOCUMENT_TOKEN_TO_BE_REPLACED 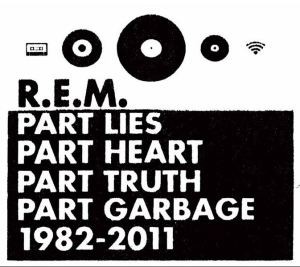 The music world was kind of shocked when R.E.M. announced their breakup. (We even devoted a whole Reissue Theory to their 1987 B-sides compilation Dead Letter Office.) It's certainly interesting timing, then, that the band has one last act of catalogue material before they split: a double-disc compilation coming in November. Named after a quippy assessment of the band by its own guitarist, Peter Buck, Part Lies, Part Heart, Part Truth, Part Garbage 1982-2011 is the first set from the band to

END_OF_DOCUMENT_TOKEN_TO_BE_REPLACED

Welcome to another installment of Reissue Theory, where we reflect on notable albums and the reissues they could someday see. With a new R.E.M. LP in stores today, we think about something that's missing from their extensive discography: a full, career-spanning compilation. Today is the day that R.E.M.'s fourteenth studio LP, Collapse Into Now, hits stores. I haven't bought it yet myself, but I have been keeping the Athens, Georgia-based rock icons in heavy rotation today; their lengthy, Rock

END_OF_DOCUMENT_TOKEN_TO_BE_REPLACED

Warner Bros. Records issued a press release last week touting their forthcoming vinyl reissues for Record Store Day, and the results are pretty neat for catalogue enthusiasts. We already told you about the upcoming Flaming Lips vinyl box, and several other classic WB-oriented LPs are coming for the special event, too. Audiophile editions of Eric Clapton's Unplugged, Fleetwood Mac's Rumours, Jimmy Eat World's Bleed American and the first two LPs by Tom Petty and The Heartbreakers will be pressed

END_OF_DOCUMENT_TOKEN_TO_BE_REPLACED

Sincerest apologies to all our readers who may have wondered where The Second Disc went off to. Though I hate jumbling personal/professional stuff with maintenance of the site, today was kind of busy. But there will be a few relaxed posts over the weekend as a way of thanking you, the reader, for your patience (and continued readership, of course!). In any case, here are two links that might be worth your perusal on the reissue front: The Yep Roc label posted a neat interview with Nick Lowe,

END_OF_DOCUMENT_TOKEN_TO_BE_REPLACED

Today, the 25th anniversary reissue of R.E.M.'s Fables of the Reconstruction hits stores. Athens, Georgia's favorite rock band has spent the past five years or so establishing their place in the pop-rock firmament: since 2006, the band's early recordings for I.R.S. Records - a six-year span between 1982 and 1987 - have been the center of much catalogue attention from EMI and Universal (each has a piece of the I.R.S. catalogue). The four members of the band - vocalist Michael Stipe, guitarist

END_OF_DOCUMENT_TOKEN_TO_BE_REPLACED

As has been customary for a few years now, 2010 will see the release of another 25th anniversary reissue for R.E.M.; this time, Fables of the Reconstruction (1985) gets the deluxe treatment. Like previous deluxe editions (Murmur in 2008 and Reckoning last year), the set will include a previously unreleased bonus disc. This time around, though, it's going to be comprised of unearthed demos (the previous deluxe sets had live shows added). The set is due from EMI* on July 13. Pre-order now and