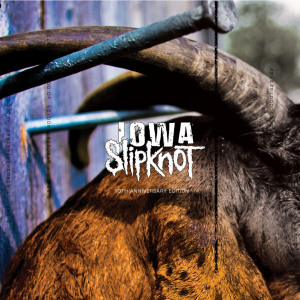 Iowa is more than Johnny Carson and John Wayne's home state. It's also the name of one of the heaviest metal albums of the past decade, by the native sons of Slipknot. The landmark album is being reissued this fall by Roadrunner Records, adding a bonus CD of live rarities and a DVD of video treasures.

With their attention-grabbing wardrobe of numbered jumpsuits and off-the-wall masks, a frenetic musical style augmented by unique percussive elements and a rough-and-tumble live stage presence, Slipknot has long stood head and shoulders above the crowded alt-metal scene of the early 2000s. But sophomore album Iowa found the band at a bit of a crossroads: band tension was at an all-time high, and addiction, management conflicts and production delays only exacerbated the situation. "When we did Iowa," drummer Shawn "Clown" Crahan told Revolver in 2008, "we hated each other. We hated the world; the world hated us."

But that hate became significantly easier to work through upon Iowa's release. Fans were elated with hard-hitting tracks like "Left Behind," "My Plauge" and "I Am Hated," and the album was a strong commercial success, debuting in Billboard's Top 5, topping the U.K. album charts and ultimately earning two Grammy nominations. Slipknot would embark on a world tour and a three-year hiatus before coming back with the strong Vol. 3: The Subliminal Verses in 2004.

Roadrunner's 10th anniversary reissue is heavy with bonus material. In addition to brand-new artwork and a bonus track, a new mix of "My Plague," a bonus CD includes all of the live performances as captured on the Disasterpieces concert video from 2002. A bonus DVD features Goat, a new hour-long documentary on the album and its aftermath directed by Crahan and four music videos. The new package drops November 1 and can be pre-ordered after the jump.