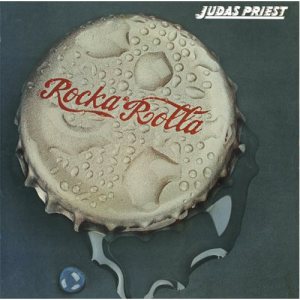 Rock legends Judas Priest have long been known for their killer blend of metal on the Columbia label in the 1970s, 1980s and 1990s. But two albums predating that contract - both of which are once again about to be independently reissued on CD - were fans' real first taste of the Priest.

In 1974, Judas Priest, a hungry upstart rock band from Birmingham, had been together for about five years. A year before, the band's lineup had started to crystallize: lead guitarist K.K. Downing and bassist Ian Hill, in the group since 1970, were joined by drummer John Hinch (their fifth percussionist) and vocalist Rob Halford, a brother of Hill's girlfriend who'd replaced founding member Al Atkins in 1973. Just as the band was about to enter the studio, the band's label, Gull Records, suggested another member, second guitarist Glenn Tipton. (Halford, Downing, Tipton and Hill would provide the nucleus of the band for nearly its entire existence; all but Downing, who retired this year, are still members.)

The shifting landscape of the band could have been an early sign of trouble for the group's debut, 1974's Rocka Rolla. Plagued by poor recording quality and difficulties with Black Sabbath producer Roger Bain, who the band claims exerted too much control over the song selection on the album, their debut was met with critical and commercial indifference.

Sophomore disc Sad Wings of Destiny fared slightly better: Hinch was replaced by Alan Moore, who'd drummed with the group in 1970, and the group, now co-producing their own work, picked tracks that were or would become live staples, including "Victim of Changes" and "The Ripper." Of course, it would take a jump to CBS to ensure Priest their greatest successes anywhere.

Both albums were released on CD by Repertoire Records in Europe in the 1990s (Rocka Rolla featured a bonus cover of Joan Baez's "Diamonds and Rust") and are being reissued again, this time in digipaks. For those who've not let their curiosity get the best of them yet, these releases are highly recommended. (That goes for sound quality, too - Repertoire's masters are arguably the best representation of the albums on compact disc.)

Both are out November 22 and can be ordered after the jump.