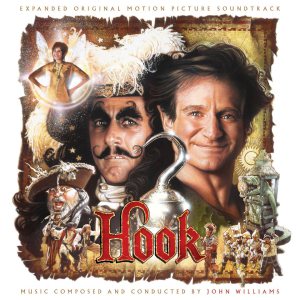 After more than three years of planning, preparing and waiting, audiences finally have a chance to enjoy an expanded edition of John Williams' score to Steven Spielberg's 1991 cult classic Hook (La-La Land Records LLLCD 1211). The world had been "getting by," so to speak, with the Epic label's original 75-minute CD presentation - a generous offering, to be sure, but one that only sort of did the score justice. While critics remain divided to indifferent on the celluloid continuation of James M. Barrie's classic Peter Pan, the reputation of Spielberg and Williams' first collaboration of the '90s has grown exponentially in the Internet age. As collaborations between the director and composer go, its complexity and majesty have earned it a spot near the scores to JAWS, Raiders of the Lost Ark and E.T. the Extra-Terrestrial in Williams' canon - so an expanded reissue had all the anticipation and intensity of a Star Wars prequel.

Now that the dust is settled, is La-La Land's two-disc Hook everything fans could expect? Is it a high watermark in soundtrack reissue craft? Will it open the floodgates for soundtrack enthusiasts everywhere as the version of Hook we've all been waiting for?

As the film score community took to the Internet to share their love for the genre, it became clear that - musically, at least - Hook was far closer to a classic than mainstream audiences would admit. Williams' gift for leitmotif (the practice of recurring themes to signify certain characters and ideas, exemplified through works by Wagner and Korngold as well as Williams' own Star Wars scores) was in rare form on the film. He crafted hummable themes for all the major characters - particularly recognizable, we would later learn, as they were conceived as songs for a musical version of the film - and by the end of the film, there were marathon passages of music that presented many of these themes in perfect symmetry.

For example, the final battle sequence in which Peter Pan rescues his children from the clutches of Captain Hook called for nearly 20 minutes of unending music - more than the Williams-scored marathons in Star Wars (the final battle over the Death Star passed 10 minutes) and E.T. (the bike chase sustained 15 minutes). To survive that pace, and to do so with truly moving, fantastical music, solidifies Williams' genius as not only a mere film composer, but the definitive classical composer of our age. And even knowing only a little about the score from official channels, fans were cognizant of the effort Williams undertook; Spielberg marveled in the liner notes to the original soundtrack that his composer began work on the film having only seen about 45 minutes of the unfinished film (which would stretch beyond two hours).

The density of the score could never have been attained on a soundtrack release at the time. Even at nearly the full length of a CD, the original Hook album missed huge action passages (including much of that final battle) and some tender and heroic cues from Peter's adventure in Neverland. Other cues were replaced by less effective alternate takes or album versions, as has been the case with countless Williams soundtracks.

Now, La-La Land have become the darling of the film score community for completing what was thought impossible and expanding Hook for a captive audience. Some fans blanched at the announcement that the composer had personally supervised and approved the project; his modest insistences that not every last note of score needed to appear on disc prevented 2008's Indiana Jones soundtrack box set from being perfect. And, indeed, some of the choices that were made - or rather, retained - at the behest of Williams have struck some as maddening. Nearly every one of the 17 cues from the original soundtrack appear in their original album edits. That means that "You Are the Pan," the cue which underscores Rufio's relinquishing leadership of the Lost Boys back to Peter, is combined with "The Face of Pan," a track that appears in the first half of the film. The film's prologue cue, used only in the film's teaser trailer, was inexplicably mis-mastered on the original soundtrack and appears at a slower speed; that has not been fixed, even as it is acknowledged in Daniel Schweiger's liner notes. 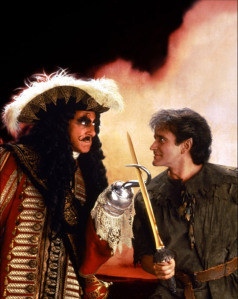 The set's master stroke, of course, is presenting well over an hour of music that has either never been available (a series of terrible-quality bootlegs over the decades barely counts) or wasn't used in the film. From the smallest moments - the film ending of the "Flight to Neverland" cue - to the lengthy two-thirds of the climactic battle music getting unearthed from the vaults, it's a dream come true to have this music on disc. And yet, the presentation of these cuts are more bothersome than minor edits in the program: upon repeated listens, it becomes clear that La-La Land had something of lesser quality than master tapes - likely music-only stems from the film negative - to work with. The difference in sound quality between original album tracks and unearthed material is sometimes too noticeable, as evidenced by strange dips in volume throughout tracks.

It's really unfortunate that things turned out this way, but it should be stressed that it's not the label's fault. They presented the material with the same high standards fans have expected from them for years - it's just they didn't have the highest quality to work with. And after a dozen or so listens, I find myself far less flustered as to how things could have gone with this set and far more grateful that a deserved classic score has made it onto CD in style, with an appealing package and great liner notes. (Schweiger finally sets the record straight on both Michael Jackson's alleged involvement with a Spielberg-helmed Peter Pan project, and shines some light on some of the intended songs for the film, written by Williams with lyricist Leslie Bricusse.)

The execution of Hook may not be what everyone has been waiting decades for. Might a better source be located down the line and released as a more definitive set? Sure, it's happened before. But why grouse about a less-than-desired but still above-average presentation of a reissue when there's revelatory music to be heard? On content alone, Hook is arguably the catalogue soundtrack to beat in 2012 - and to listen will be an awfully big adventure.