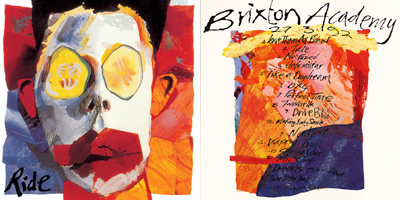 Following Rhino’s great expansion of the debut LP by shoegaze pioneers Ride, the U.K. band are expanding their second album through an independent label with some audiovisual extras packaged in the set.

Going Blank Again, released 20 years ago in 1992, was a bit of an evolution from the traditional, reverb-heavy sounds of their full-length debut, 1990’s Nowhere. While the guitars still had their typical buzzsaw sensibilities, the band experimented with more layered vocals and a less guitar-heavy mix, drawing comparisons with, surprisingly, power-pop labelmates Teenage Fanclub. NME‘s review sums it up nicely: “[Going Blank Again] fills in the lines between Ride’s beauty with cement and then builds like a demon. There is no stone left unturned, as they open up to new reference points…would you believe King Crimson? New Order? The Who? The Beach Boys?”

The deluxe edition of Going Blank Again, to be released through Oxford Music, will feature four bonus tracks from non-LP singles (the same tracks appended on a reissue from Ignition Records in the U.K. in 2001), as well as the first-ever DVD release of Brixton, a 1992 live show released on VHS (and laserdisc in Japan). The show is presented fresh from the original digital video master, with a new audio remix by John Catlin and Catherine Marks (the latter of whom mixed the live show on the bonus disc of Rhino’s Nowhere reissue).

The first 2,000 copies of the album – discounted at £20, from a non-numbered list price of £24 – will be numbered (as of this writing, more than 1,400 are left); of those, 50 random copies will be signed by all four members of the band. A pound from every sale will be donated to the U.K. charity Friends of the Earth Bee Cause.

Check out the set after the jump.