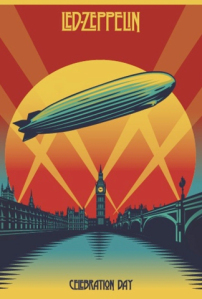 It was the reunion everyone wanted, but possibly never expected. On December 10, 2007, at London's O2 Arena, Robert Plant, Jimmy Page, John Paul Jones and Jason Bonham (John's son) took the stage as Led Zeppelin for the first time since the band broke up in 1980. (Page, Plant and Jones had several tepidly-received reunions in the '80s, one at Live Aid and one at the Atlantic Records 40th anniversary concert, but none were considered by the band to be true Led Zeppelin performances.) It was the passing of Ahmet Ertegun, Atlantic Records founder and mentor to the group, that got them together, and the 16-song set was a fitting tribute to the musical icon.

This year, five years after that landmark performance before some 16,000 attendees, Atlantic Records is finally making that concert available to the public as Celebration Day. It's a fitting tribute for one of the heaviest bands in the world, with an international theatrical release planned starting October 17, followed by a multi-format release on November 19.