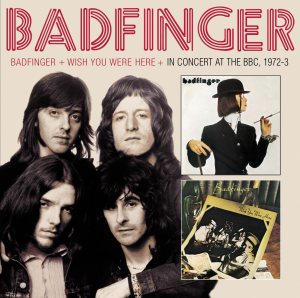 An estimated ten million people watched the September 29 series finale of AMC’s Breaking Bad, with a memorable final scene set to Badfinger’s “Baby Blue.”   By the following morning, the Pete Ham song produced by Todd Rundgren for the 1971 Apple Records release Straight Up had been downloaded more than 5,000 times – boosting its sales by some 3,000 percent!  “Baby Blue” remained in the iTunes Top 20 for next two days.  It also racked up roughly 30,000 downloads over the following week, conferring hit status once again upon the song which reached No. 14 on the Billboard chart in 1972.  With Badfinger back in the spotlight, there couldn’t be a better time for Edsel to release a compendium of the band’s two albums for Warner Bros. Records and a disc of live BBC performances.  On October 28, the Demon Music Group label unveils Badfinger/Wish You Were Here/In Concert at the BBC 1972-3 on two CDs.

Following five albums for The Beatles’ Apple label (including one as The Iveys in 1969), the hitmaking band behind “Come and Get It” and “Day After Day” decamped their fab home for the Warner Bros. label.  The quartet of Pete Ham, Tom Evans, Joey Molland and Mike Gibbins announced their artistic rebirth by titling the album, simply, Badfinger.  Producer Chris Thomas resumed work with the group in 1973 shortly after completing Apple swansong Ass, which was released in November 1973 in the U.S. and March 1974 abroad.  Badfinger’s arrival actually preceded the U.K. release of Ass, arriving in stores in February 1974.  Consisting entirely of group originals, the album nonetheless failed to ignite the charts.  Molland’s “Love is Easy,” released in the U.K. as a single, failed to make the charts.  The choice for the American market, Ham’s “I Miss You,” also missed the mark.  With the band also engaged in litigation with Apple, Badfinger didn’t stand much of a chance.  It peaked at No. 161 on the Billboard 200, becoming the group’s lowest-charting LP.

Undeterred, Badfinger regrouped with Thomas in the spring of 1974 at the famed Caribou Ranch in Colorado, the same studio where Elton John, Chicago and The Beach Boys all called home at one time or another.  The album eventually titled Wish You Were Here would be the band’s second and last album for Warner Bros., as well as the final album by the original foursome.  With just nine tracks all written by band members, Wish You Were Here was received more favorably than its predecessor upon its November 1974 release.  Today, some pundits even consider it Badfinger’s best, most cohesive LP.  But just weeks after its release, the album was pulled as a result of another lawsuit, this time between Warner Bros. and the band’s management.  It did make the Billboard chart at No. 148, besting Badfinger’s performance but hardly restoring the group to chart supremacy.

Wish You Were Here marked the end of the classic iteration of the group.  Joey Molland quit Badfinger following a strife-filled tour; Ham, Evans and Gibbins joined with Bob Jackson (a brief replacement for Ham when he briefly quit following Wish You Were Here) in December 1974 to create the Head First album which went unreleased until 2000.  (Produced by Kenny Kerner and Richie Wise of KISS fame, Head First was reportedly accepted by Warner’s recording division in Los Angeles, but a dispute with Warner’s publishing arm derailed it from release.)  Pete Ham committed suicide in 1975, dashing hopes of any subsequent reunions.  Evans and Molland picked up the pieces in 1979 with musicians Joe Tansin and Kenny Harck, reforming Badfinger for Airwaves on Warner Bros.’ sister label Elektra.  A different line-up of Molland, Evans, Tony Kaye, Glenn Sherba and Richard Bryans issued Say No More in 1981 on the Radio label, the final new album to bear the Badfinger moniker.  Two years later, Tom Evans also took his own life.

Edsel’s upcoming release contains Badfinger and Wish You Were Here on one CD.  The second disc includes all of the 2007 release In Concert at the BBC 1972-3.  Hit the jump for more details, plus the full track listing and pre-order links!

A number of Badfinger archival recordings arrived on CD have been issued since the 1990s, including multiple volumes of Pete Ham’s demos, 1990’s Day After Day: Live recorded in 1974, and 1997’s In Concert at the BBC 1972-3.  This 15-track volume, originally released on the Strange Fruit label, contains two seven-song performances taped for the BBC on June 8, 1972 and August 10, 1973 plus one bonus song.  It’s reprised in full as the second CD of Edsel’s new set.  Oddly, few of the group’s hits are present – “No Matter What,” “Day After Day,” “Without You” (a No. 1 for Harry Nilsson) and “Baby Blue” are all absent.  The 1972 concert draws on a repertoire from No Dice and Straight Up plus a couple of Dave Mason covers; the 1973 broadcast also tapped Ass and the as-of-then-unreleased Badfinger.  Joey Molland’s “Suitcase” was performed during both programs.  The original CD's bonus track (a 1970 performance of the Paul McCartney-penned “Come and Get It” recorded for Top of the Pops) is not included here.

Badfinger/Wish You Were Here/In Concert at the BBC 1972-3 arrives in stores on October 28 in the U.K. and one week later in the U.S., and you can pre-order at the links below!