Always Something There: Cherry Pop Reissues Viola Wills’ “If You Could Read My Mind” 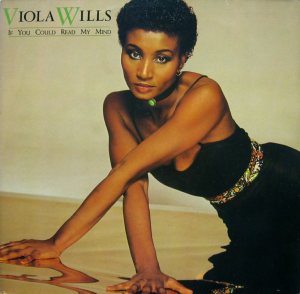 Released during the last days of disco, Viola Wills’ 1980 album If You Could Read My Mind blended then-current dance styles with deliciously soulful vocals and a genre-bending repertoire of songs.  Cherry Pop has recently reissued this LP from the onetime Barry White protégé and Joe Cocker backing vocalist in an expanded and remastered edition that reveals it to be a hidden gem with appeal to fans of disco, Hi-NRG and MOR pop/soft rock.

Los Angeles-born Viola Wills (1939-2009) was joined by members of Joe Cocker’s band for her 1974 album debut Soft Centres, but had to wait until 1979 to score a major hit single.  That success came with Wills’ reworked version of “Gonna Get Along Without You Now,” Milton Kellem’s 1951 song introduced by Teresa Brewer but best-known in its 1956 recording by young sister act Patience and Prudence.  Whereas the fourteen year-olds’ version was sweetness and light, Wills’ driving rendition made it clear that you wouldn’t want to be on the receiving end!  Her mature, lightly Latin disco recording, with electronic flourishes, announced that Wills was in the business of musical reinvention.  It’s included on If You Could Read My Mind among a group of similarly interesting cover versions and a couple of originals from Wills’ own pen.

For the album’s opening track, Wills transformed Gordon Lightfoot’s moody ballad “If You Could Read My Mind” into a toe-tapping, Hi-NRG floor-filler, with mariachi horns adding a quirky touch.  Wills and producer Jerry McCabe expertly made over ballads like “Read My Mind” (a No. 2 U.S. Hot Dance Club Play entry) and Carole King and Gerry Goffin’s “Up on the Roof” in disco style without sacrificing the integrity of the original song.  A contemporary sheen and a dance beat were also added to Burt Bacharach and Hal David’s “(There’s) Always Something There to Remind Me” roughly three years before Naked Eyes thought of modernizing the vintage tune.  Wills’ rendition hews much closer to Bacharach’s original melody than Naked Eyes’ however.  Did her recording influence the duo?  The new liner notes in Cherry Pop’s reissue by Stephen “SPAZ” Schnee speculate on it, pointing out that drummer Phil Towner and bassist Tony Hibbert, one half of British electropop quartet New Musik, played on Wills’ album.  That group was led by Tony Mansfield…who went on to produce Naked Eyes’ version of the song.

We have more after the jump, including the full track listing and order links!

Wills dug even further back to craft a disco take on Sammy Fain and Paul Francis Webster’s Academy Award-winning ballad (and U.S. chart-topper) “Secret Love,” introduced by Doris Day in the 1953 movie musical Calamity Jane.  Wills and McCabe also revisited Mort Garson and Earl Shuman’s “Starry-Eyed” in bubbly fashion.  The very first U.K. No. 1 hit of the 1960s in Michael Holliday’s recording, the song was introduced in the U.S. the year before by Gary Stites.

One of the album’s strongest tracks is the lightly-grooving version of “Midnight Blue.”  Graced with one of Melissa Manchester’s mot beguiling melodies and evocative lyrics from Carole Bayer Sager, “Midnight Blue” was a perfect match for Wills’ sensual, expressive vocals.  Wills went even further in a pop direction with a dance makeover of Pickettywitch’s 1970 Top 5 hit “That Same Old Feeling,” written by Tony Macaulay and John McLeod (“Baby Now That I’ve Found You,” “Let the Heartaches Begin”).  Wills did well by including two of her own compositions   “Don’t Ever Stop Loving Me,” a sweet ballad with a strong horn and string arrangement, fits snugly among its distinguished company as does her uptempo song of devotion, “Let Me Be Your Rock.”

Produced by Big Break Records’ team of Wayne A. Dickson and Malcolm McKenzie, the reissue of If You Could Read My Mind adds six bonus tracks: four mixes of “Gonna Get Along Without You Now,” Tom Moulton’s mix of “If You Could Read My Mind,” and the Disco Version of “(There’s) Always Something There to Remind Me.”  Nick Robbins has newly remastered the album.

Viola Wills continued to record in the style established on If You Could Read My Mind, reinterpreting such songs as Bacharach and David’s “A House is Not a Home,” Harold Arlen and Ted Koehler’s “Stormy Weather,” and Joni Mitchell’s “Both Sides Now” as the eighties progressed.  This expanded remaster of her 1979 gem is available now from Cherry Pop, and can be ordered at the links below!