At long last, High Moon is rising.  Yesterday, on January 2, the long-aborning record label revealed on its Facebook page that pre-orders were being taken for the label's CD releases of Gene Clark's Two Sides to Every Story and Love's Black Beauty. We've closely followed the High Moon story here at The Second Disc, from the label's initial announcements in Spring 2011 through an optimistic status update almost two years ago on January 30, 2012.  Deluxe, 180-gram vinyl LPs arrived for both titles in 2013, but until now, the promised CD releases hadn't materialized.  Thankfully, these titles look to be worth the wait and are promised to ship this month (January)!  See below for full details on both releases, including complete track listings and further new information in bold.

POST OF 1/30/12: Some of you with long-term memories might recall our happily breaking the news about High Moon Records back in May 2011.  The New York-based independent label had recently held a release party to announce reissues of Love's 1973 unreleased album Black Beauty and Gene Clark's 1977 Two Sides to Every Story.  Both inaugural titles were slated to arrive on June 7.  June came and went, as did 2011, with no sign of either of these much-anticipated releases.

So we're happy to relate the news shared last month by High Moon's owners George Wallace and J.D. Martignon.  As of December 9, High Moon was "finalizing the artwork for both releases on LP and CD" and offered new hints as to the talented names working on the albums.  Both albums were remastered by multi-Grammy Award nominee Dan Hersch; the lacquers were mastered and cut by Doug Sax, a name likely familiar to all collectors of audiophile vinyl.  The same care is being put into the albums' booklets.  The essay for Black Beauty was written by Ben Edmonds (Rolling Stone, Mojo), and Edmonds' notes will be joined by over fifty never-before-seen pictures of Arthur Lee and the band during the sessions, taken by Herbert Worthington (Fleetwood Mac's Rumours).   As for Clark's Two Sides, his biographer John Einarson has provided the new essay.  High Moon will include more never-seen photography, this time by Ed Caraeef from the original album photo session.

Both discs will be packaged in hardbound eco-books for the CDs, while the 180-gram LPs will be housed in tip-on jackets with full-color, 11"x 11" magazine-style inserts.  For much more on High Moon Records, including track listings and discographical info for these two albums, hit the jump for the salient details!

ORIGINAL POST of 5/5/11: Hey, reissue fans!  (That means you!)  It's time to welcome a new label to the club.  High Moon Records has just been established by owners George Wallace and J.D. Martignon and general manager Craig Hyman to specialize in the sounds of the 1960s and 1970s, and the label has selected two titles to kick things off in a big way.  Both releases were celebrated with an April 29 release party at the Roxy on (where else?) the hallowed Sunset Strip: Love's 1973 unreleased album Black Beauty, and Gene Clark's 1977 Two Sides to Every Story.

1973's Black Beauty was recorded by the only all-black lineup of Arthur Lee's famed band Love, but thanks to the collapse of Lee's Buffalo Records label, it never saw the light of day.  Previously available only as a bootleg, High Moon's first-ever official release of this lost classic will be released on vinyl, digital and CD, with six rare bonus tracks, photographs by Herbert Worthington and a new essay by historian Ben Edmonds.  High Moon's release is a most welcome addition to the legacy of the psychedelic rock pioneers still best-known for the 1967 Forever Changes.  High Moon describes the upcoming CD as a "TrueSound Audiophile CD" packaged in a hardbound eco-book with a 60-page full-color booklet.  The 180-gram LP is available now, and is "packaged in [a] state-of-the-art tip-on sleeve with 11" x 11" full-color, 28-page book with download card for High Quality MP3s."  Black Beauty has been remastered for CD by Dan Hersch and for vinyl by Doug Sax.

Former Byrd Gene Clark's 1977 RSO album Two Sides to Every Story has been available on CD in the past, but currently commands upwards of $150 second-hand!  It followed 1974's No Other on the Asylum label.  Though now considered by many to be the artist's masterpiece, No Other was a commercial failure and a most unconventional record.  Two Sides features more traditional songwriting and features Doug Dillard and Emmylou Harris among its guests.  High Moon's reissue will be released on vinyl and CD and adds bonus tracks, unseen photographs and new liner notes by John Einerson.  Clark's son Kai regards Two Sides as "a personal diary during this trying time in [Clark's] life" and now fans of the influential country-rock legend's balladry can experience it themselves.  The album is released in cooperation with Universal Music Group and Clark's estate.  The LP release, mastered for vinyl by Doug Sax and available now from High Moon, is "packaged in [a] state-of-the-art tip-on sleeve with 11" x 11" full-color 16-page book."   The CD, mastered by Dan Hersch, is packaged in a deluxe hardbound eco-book with a 24-page, full-color booklet.

At the time of this writing, the bonus tracks for the CD release are not on High Moon's website, and there has been a change in the contents of the LP's download card.  Originally slated to include the album's tracks, it will now provide access to "Live 1975 Gene Clark performances featuring fresh takes of Two Sides material performed by the short-lived five-piece Silverados band. Plus songs spanning Gene's career, from twangy updates of classics to never-before-released originals. Tracks also include a never-aired 1974 Gene Clark interview with legendary L.A. disc jockey B. Mitchel Reed."  However, this additional material will not be on the CD release. 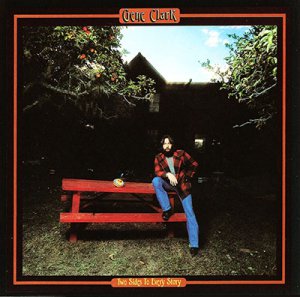 Wallace and Hyman confirmed to Billboard that future projects include reissues of music from Lotti Golden and Sopwith Camel plus unreleased material from the Ace of Cups, the all-girl San Francisco band.  The New York-based label is also exploring the possibility of releasing Reel to Real, the 1975 Love album recorded for RSO.  Wallace confirmed that High Moon promises "better packaging, more liner notes, more unpublished photographs," which is music to our ears here at The Second Disc.  He continued to Billboard, "This is a way to beat downloading. There are still people out there looking for aesthetically pleasing packages. Almost anything can be made quasi-commercial if it is contextualized in the right way."

You can visit the label here and can pre-order titles - due this month, January 2014 - directly from High Moon at the label's shop!