Along with Buck Owens - with whom he shared a musical history and a wife - Merle Haggard (1937-2016) defined The Bakersfield Sound of country music: authentic, raw, rooted in honky-tonks.  But unlike the Texas-born and Arizona-raised Owens, Haggard was actually born in Bakersfield and raised just across the river from that California town.  "Hag," as he preferred to be known, rocketed to superstardom thanks to "Okie from Muskogee," his controversial 1969 song that was either a scathing

END_OF_DOCUMENT_TOKEN_TO_BE_REPLACED

February promises to be a packed month for music fans, as Esoteric brings listeners a new, expanded reissue of Renaissance's 1973 classic, Ashes Are Burning, as well as a reissue of The Byrds, the reunion album by the legendary folk-rock group.  Also on the way are reissues of Tear Gas's self-titled album, an expanded edition of Greenslade's Time and Tide, and a new 3-CD set called Revolution: Underground Sounds of 1968.  Meanwhile, Esoteric's Reactive imprint will issue a 4-CD set

END_OF_DOCUMENT_TOKEN_TO_BE_REPLACED

Originally released on the Asylum label in 1973, The Byrds' legendary reunion album saw Gene Clark, Chris Hillman, David Crosby, Roger McGuinn, and Michael Clarke performing together for the first time since 1966.  The group recorded the album in late-1972 at the famed Wally Heider Studios in L.A.  The results included new compositions by McGuinn ("Sweet Mary" and "Born to Rock n' Roll"), Clark ("Full Circle" and "Changing Heart"),  and Hillman ("Things Will Be Better" and "Borrowing Time")

END_OF_DOCUMENT_TOKEN_TO_BE_REPLACED

From all of us here at Second Disc HQ to all of you, we hope you've enjoyed a wonderful Thanksgiving in the company of beloved family and friends.  Of course, from this day which conjures nostalgic and warm feelings comes a celebration of a different kind with this year's annual Black Friday shopping extravaganza - and Record Store Day's miniature cousin to April's yearly event. In keeping with TSD tradition, Joe, Randy, and Sam have elected our top picks of the numerous titles being released

END_OF_DOCUMENT_TOKEN_TO_BE_REPLACED

Seven is Legacy Recordings' lucky number for this Black Friday's annual Record Store Day event.  On November 23, the label will release seven titles on limited edition vinyl in a variety of genres reflecting the diversity of the Sony vaults. The offerings are highlighted by an EP of mono mixes from Jimi Hendrix; the vinyl debut of the Legacy Edition of The Byrds' Sweetheart of the Rodeo, coinciding with Roger McGuinn and Chris Hillman's current tour celebrating the album; and more vinyl

END_OF_DOCUMENT_TOKEN_TO_BE_REPLACED

Ace Records rightfully has a reputation for its top-notch collections, and three recent releases are no exception to that rule. Jon Savage's 1965: The Year The Sixties Ignited follows previous releases compiled for Ace by historian Savage covering the years 1966 and 1967.  This latest volume, with 48 tracks on 2 CDs, explores how the various strains of pop music came together to awaken the culture: whether the power of Motown (the label had six number ones) or Bob Dylan (who inspired an

END_OF_DOCUMENT_TOKEN_TO_BE_REPLACED

While we normally concentrate on CD reissues here at The Second Disc, we do occasionally like to highlight other titles which we think may be of interest to our readers.  One such project, just announced from Shout! Factory, certainly qualifies:  a 2-disc Blu-ray set entitled the T.A.M.I. Show/The Big T.N.T. Show Collector's Edition due out on December 2. Directed by Steve Binder, T.A.M.I. Show (meaning either "Teenage Awards Music International" or "Teen Age Music International") was filmed

END_OF_DOCUMENT_TOKEN_TO_BE_REPLACED

Among Ace Records' recent releases is a collection that just might make you scream - make that "Primal Scream" - with elation.  Bobby Gillespie Presents Sunday Morning Comin' Down is a mix CD curated by Primal Scream founder/Jesus and Mary Chain drummer.  The Glasgow-born singer/songwriter/musician has selected 20 of his favorite tracks for Ace, and the result is a set that not only illuminates Gillespie's influences as an artist but stands on its own with thematic and sonic coherence.  In

END_OF_DOCUMENT_TOKEN_TO_BE_REPLACED

When the album simply entitled Byrds arrived on David Geffen’s Asylum label in 1973, it had been only about a year-and-a-half since the last record from the California folk-rock heroes. But the original line-up of Gene Clark, David Crosby, Roger McGuinn, Chris Hillman and Michael Clarke hadn’t recorded a complete album together since 1965. Byrds would be the group’s first long-player for a label other than Columbia Records – and the final Byrds album to date. Australia’s Raven Records label has

END_OF_DOCUMENT_TOKEN_TO_BE_REPLACED

At long last, High Moon is rising.  Yesterday, on January 2, the long-aborning record label revealed on its Facebook page that pre-orders were being taken for the label's CD releases of Gene Clark's Two Sides to Every Story and Love's Black Beauty. We've closely followed the High Moon story here at The Second Disc, from the label's initial announcements in Spring 2011 through an optimistic status update almost two years ago on January 30, 2012.  Deluxe, 180-gram vinyl LPs arrived for both titles

END_OF_DOCUMENT_TOKEN_TO_BE_REPLACED

Ace Records is Going Wild!…not just with a rip-roaring rock-and-roll compilation of that name, but with a journey to the farthest reaches of the galaxy!  Yes, the London-based label is travelling from the Bay Area to the Milky Way with two of its latest releases: Greatest Hits from Outer Space and Going Wild! Music City Rock 'n' Roll. Based on the 24 tracks of Ace’s Greatest Hits from Outer Space, the final frontier engaged a wide variety of artists in every conceivable musical genre.  On this

END_OF_DOCUMENT_TOKEN_TO_BE_REPLACED

Though Gene Clark first made his mark as an original member of The Byrds, where he penned such classic folk-rock songs as "Feel a Whole Lot Better," he left behind as rich a legacy as a solo artist as he did with The Byrds.  Clark's tenure as a Byrd wasn't a long one; though the group rose to prominence with its 1965 Columbia debut Mr. Tambourine Man, Clark left the band in early 1966 amid interpersonal strife and a dislike of touring.   He re-emerged quickly on a 1967 Columbia set with The

END_OF_DOCUMENT_TOKEN_TO_BE_REPLACED

Welcome to the working week!  This morning's Short Takes brings us to the U.K. for the 25th anniversary of a pop classic, and to Japan, where one of the 1960s' greatest bands is getting the red carpet treatment! Though we're reluctant to rush the summer away, it sure looks like this September's going to be a month with kick!  Kick, that is.  It appears that Universal U.K. will be giving the full, Super Deluxe treatment to Aussie band INXS' 1987 breakthrough album.  The multi-platinum Kick

END_OF_DOCUMENT_TOKEN_TO_BE_REPLACED 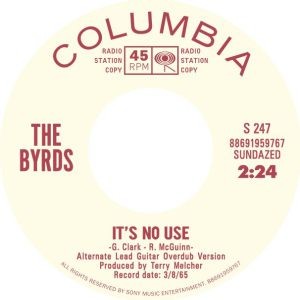 Sundazed Records, one of our favorite independent catalogue labels, has announced their exclusive titles for Record Store Day. This year, the label has prepped some killer cuts from some of the best '60s folk and garage-rock ensembles - including a few rare tracks making vinyl debuts and even some unreleased treasures. The late, great Gene Clark is the standout artist in the batch, with a three appearances on Record Store Day - one with Doug Dillard (in which two non-LP A-sides are released on

END_OF_DOCUMENT_TOKEN_TO_BE_REPLACED

On November 10, 1964, The Byrds inked a deal with Columbia Records.  Or more accurately, Jim (later Roger) McGuinn, Gene Clark and David Crosby signed to Columbia Records, with Michael Clarke and Chris Hillman officially joining the roster later.  But before that auspicious major label signing, The Byrds' bags were packed, pre-flyte, it was zero hour...and after that day, they were destined to be high as a kite...eight miles high.  (Pardon the mixing of musical metaphors.)  The band's

END_OF_DOCUMENT_TOKEN_TO_BE_REPLACED

Spin Doctors, Pocket Full of Kryptonite: 20th Anniversary Edition (Epic/Legacy) The "Two Princes" guys...hey, stop laughing...have their hit debut album remastered and expanded - cut that out! - with a bonus disc of demos and rarities. (Official site) Aerosmith, Celine Dion, The Byrds and Carole King, The Essential 3.0 (Columbia/Epic/Legacy) Four Essential compilations get the third-disc treatment. Note that the Celine Dion title is identical to 2008's My Love: The Essential Collection and

END_OF_DOCUMENT_TOKEN_TO_BE_REPLACED

This morning, Sony’s Legacy division kicked off a new catalogue initiative that’s sure to raise a few eyebrows!  The Complete Album Collection box sets bring together an artist’s entire tenure at a label (in these cases, Columbia and RCA Victor) in one tidy box set, with albums in individual mini-LP sleeves.  The first four artists to receive this treatment are The Byrds, Sam Cooke, Stan Getz and Return to Forever, and the boxes are available for pre-order now exclusively through PopMarket.