Though Heroes and Villains is the title of Grapefruit's new 3-CD anthology chronicling The Sound of Los Angeles 1965-68, that famous Beach Boys song isn't among its 90 selections.  Not that Brian Wilson and co. are absent; the compilation instead presents another SMiLE tune, "Do You Like Worms (Roll Plymouth Rock)" as part of its portrait of a place and time in music history when it truly seemed anything was possible.  U.K.-based compiler David Wells persuasively makes the case here that L.A.

END_OF_DOCUMENT_TOKEN_TO_BE_REPLACED

There are some things you can just count on: taxes, death, trouble...add to the list the joy of listening to a bunch of new albums in October while supporting your favorite brick-and-mortar shop. Yep, it's back. Rhino's annual Rocktober campaign is back on, boasting a stellar line-up of lost gems and favorites from the Warner vault. From landmark albums by famed '90s rockers, a desirable compilation of John Prine's '70s work, reissues of DEVO and Talking Heads classics, a clutch of soundtracks,

END_OF_DOCUMENT_TOKEN_TO_BE_REPLACED

On the heels of their announcement of the expansive Woodstock 50 campaign, Rhino has announced a new series celebrating The Summer of '69: Peace, Love, and Music. Beginning on July 9, the campaign will feature a three-week-long roll-out of limited-edition vinyl releases of classic recordings from the Woodstock era by the likes of Van Morrison; The Monkees; Grateful Dead; Crosby, Stills & Nash; and many more. These LPs will be available in participating brick-and-mortar stores only.  Online

END_OF_DOCUMENT_TOKEN_TO_BE_REPLACED

Forever Changes, the third album from the Los Angeles band Love, arrived on Elektra Records in November 1967 - the same month as The Moody Blues' Days of Future Passed, Cream's Disraeli Gears, The Beatles' Magical Mystery Tour, Jefferson Airplane's After Bathing at Baxter's, The Hollies' Butterfly, and The Monkees' Pisces, Aquarius, Capricorn and Jones.  Psychedelia was in the air, not to mention creativity and experimentation in music at an all-time high that is still largely unrivaled.

END_OF_DOCUMENT_TOKEN_TO_BE_REPLACED

Welcome to this week's Release Round-Up, and one of the biggest Release Fridays of the year to date! Chicago, VI Decades Live: This is What We Do (Rhino)  (Amazon U.S. / Amazon U.K. / Amazon Canada) Chicago celebrates 50 years on the road with this expansive new box set featuring 4 CDs and 1 DVD of previously unreleased live music recorded between 1969 and 2014.  This set includes two complete concerts - The Isle of Wight, 1970 on CD and a Rockpalast broadcast from Germany in 1977 on

END_OF_DOCUMENT_TOKEN_TO_BE_REPLACED

Released just months after the so-called Summer of Love, Forever Changes was the third studio album by the group simply and boldly called Love.  But more than just that four-letter word was on the mind of bandleader/songwriter Arthur Lee, who saw beyond sunshine and flowers that summer.  Love traded in the punchy electric guitar sound of the group's first two albums (and successful singles like "7 and 7 Is" and a cover of Burt Bacharach and Hal David's "My Little Red Book") for a denser, more

END_OF_DOCUMENT_TOKEN_TO_BE_REPLACED

Welcome to this week's Release Round-Up! Bon Jovi, The Albums (Island/UMe) (Amazon U.S. / Amazon U.K. / Amazon Canada) Bon Jovi's The Albums includes all 14 of the group's studio efforts, from 1984's blistering-glam self-titled debut to the just-released This House is Not for Sale, the first album without longtime guitarist Richie Sambora. Eleven of these albums have hit the Billboard Top 10 since 1986's chart-topping breakthrough Slippery When Wet; of those, six of these albums

END_OF_DOCUMENT_TOKEN_TO_BE_REPLACED

Welcome to this week's Release Round-Up which continues this autumn's tradition of having each week packed with box sets from heavy hitters - in this case, The Rolling Stones, The Velvet Underground, The Who, Queen, Grateful Dead, Frank Sinatra, and they're still not all!  Plus: CD and vinyl reissues, anthologies, and much more! The Beach Boys, Beach Boys' Party: Uncovered and Unplugged (Capitol) (Amazon U.S. / Amazon U.K.) The first disc of this 2-CD, 81-track set features the

END_OF_DOCUMENT_TOKEN_TO_BE_REPLACED

High Moon Records, the label behind the recent releases of Love's Black Beauty and Gene Clark's Two Sides to Every Story, has announced its next title.  On November 27, High Moon will reissue Love's 1974 album Reel to Real as a newly-expanded Deluxe Edition in the following formats: Expanded CD packaged in a deluxe custom digipak with a full-color, 32-page booklet; LP pressed on high-quality RTI vinyl with full-color, 28-page LP-sized booklet; LP includes download card for high-quality

END_OF_DOCUMENT_TOKEN_TO_BE_REPLACED

At long last, High Moon is rising.  Yesterday, on January 2, the long-aborning record label revealed on its Facebook page that pre-orders were being taken for the label's CD releases of Gene Clark's Two Sides to Every Story and Love's Black Beauty. We've closely followed the High Moon story here at The Second Disc, from the label's initial announcements in Spring 2011 through an optimistic status update almost two years ago on January 30, 2012.  Deluxe, 180-gram vinyl LPs arrived for both titles

END_OF_DOCUMENT_TOKEN_TO_BE_REPLACED

In his 85th year, Burt Bacharach has kept a pace that would wear out many a younger man.  In addition to performing a number of concert engagements, the Oscar, Grammy and Gershwin Prize-winning composer has released a memoir, continued work on three musical theatre projects, co-written songs with Bernie Taupin and J.D. Souther, and even penned a melody for Japanese singer Ringo Sheena.  Though Bacharach keeps moving forward, numerous releases this year have looked back on his illustrious

END_OF_DOCUMENT_TOKEN_TO_BE_REPLACED

Here's one for the "in case you missed it" file: Arthur Lee and Love's early '70s recordings for Columbia Records were recently released in full as a digital album. Found Love: The Lost '71 Sessions finds Lee and the then-current Love lineup - bassist Frank Fayad, guitarist Craig Tarwater and drummer Don Poncher - considerably removed from the expansive psychedelia of Da Capo and Forever Changes, embracing a much darker, bluesier, Hendrix-ian sound. The album, provisionally titled Dear You, was

END_OF_DOCUMENT_TOKEN_TO_BE_REPLACED

Here in the U. S. of A., Black Friday is almost upon us: that unusual date following the prior day of giving thanks, in which consumers make a mad dash to the local big-box store, mall or shopping center to procure bargains for the holiday season ahead.  Retailers are controversially beginning Black Friday “festivities” even earlier than usual this year, with many sales starting on Thanksgiving Day itself and not even at midnight but in the early part of the evening.  For a number of recent

END_OF_DOCUMENT_TOKEN_TO_BE_REPLACED

John and Michy were gettin' kind of itchy/Just to leave the folk music behind/Zal and Denny workin' for a penny /Tryin' to get a fish on the line.. Those lyrics from The Mamas and the Papas’ 1967 “Creeque Alley” begin to tell the story of the famous band, and it’s one of eighteen tracks on a new compilation aiming to tell a bigger story: that of “The California Scene in the 1960s.”  Yes, this story has been told more comprehensively elsewhere; see two of our favorite box sets dedicated to San

END_OF_DOCUMENT_TOKEN_TO_BE_REPLACED

It's the lucky thirteenth part of our look at the many reissues of the 100 greatest albums of all time, as selected by Rolling Stone in 2003! We’ll explore the various versions of these classic albums on disc, letting you know which audio treasures can be found on which releases. In today's group, we get the blues, meet the Brits, head to Laurel Canyon and fall in Love!  40. Love, Forever Changes (Elektra, 1967) Welcome to the Top 40!  Released just months after the so-called Summer of Love,

END_OF_DOCUMENT_TOKEN_TO_BE_REPLACED

Queen have confirmed their last batch of expanded studio albums - The Works, A Kind of Magic, The Miracle, Innuendo and Made in Heaven - to be released in the U.K. on September 5 from Island/UMC. Another Deep Cuts compilation will be released as well, as seen above; neither that set nor the bonus material have gotten confirmed track lists. Note that all 15 remastered studio albums will be out before the second batch of reissues hit American shelves. It usually pains me to agree with Nine Inch

END_OF_DOCUMENT_TOKEN_TO_BE_REPLACED 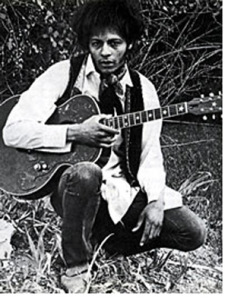 One of the more legendary lost albums of the 1970s - Love's Black Beauty - is getting its first legitimate release this summer. Love remains one of the great unsung bands of the 1960s. Known for its racially diverse lineup - black singer/songwriter/guitarist Arthur Lee is arguably the best-known member of the group - and the psych-folk-rock style of their critically acclaimed 1967 LPs Da Capo and Forever Changes, Love left a legacy that has outlived most of its members (including Lee, who died