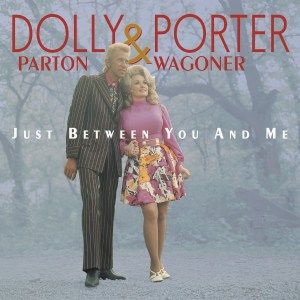 Johnny and June. George and Tammy. Porter and Dolly. The world of country music had some of its greatest successes in pairs - duets whose songs projected all the joy and pain of love and loss, just like any good country song should. Whether the joy or pain was real or simply projected very well is another matter, as anyone who's seen Walk the Line can attest.

In the case of Porter Wagoner and Dolly Parton, their relationship was never romantic and often turbulent, but it did yield one of the most bountiful dual discographies in the genre. This year, Bear Family Records will celebrate that union with Just Between You and Me: The Complete Recordings 1967-1976, a six-disc box set featuring every one of Porter and Dolly's recordings for the RCA Victor label.

In 1967, Porter Wagoner was left with the unenviable task of replacing singer Norma Jean Beasler, an RCA Victor artist and co-star of his long-running syndicated television show since its inception in 1960. Audiences were quick to judge the blonde, buxom Parton, who'd been previously signed to Monument Records as a bubblegum pop artist despite a desire to pursue her country roots. But Parton's intoxicating, vibrato-laden voice and natural on-stage chemistry with Wagoner made her a natural starlet, both as part of Wagoner's line-up and on her own. By the early 1970s, she was a bona-fide country legend, with singles like "Just Because I'm a Woman," "Mule Skinner Blues," "Coat of Many Colors" and the incomparable "Jolene."

Porter and Dolly would record a dozen records for RCA in a decade, often featuring songs they wrote themselves. They logged 20 singles on Billboard's Country Top 40, including "The Last Thing on My Mind," "Daddy Was An Old Time Preacher Man," "Just Someone I Used to Know," "If Teardrops Were Pennies" and the chart-topping "Please Don't Stop Loving Me." But the duo did not always get along offstage. Dolly told The Los Angeles Times in 2008, "He was in charge, and it was his show, but he was also very strong willed. That's why we fought like crazy, because I wouldn't put up with a bunch of stuff. Out of respect for him, I knew he was the boss, and I would go along to where I felt this was reasonable for me. But once it passed points where it was like, your way or my way, to prove to you that I can do it, then I would just pitch a damn fit. I wouldn't care if it killed me."

Ultimately, Dolly parted ways with Porter by 1976, although her respect for him as a partner as well as one who gave her a chance to break through in the country world led to the writing of one of Parton's greatest compositions: "I Will Always Love You." And the duo would patch up their personal and professional differences in later years: a 1980 album, Porter & Dolly, was comprised of outtakes from the pair's partnership including the No. 2 smash "Making Plans." And Dolly was there to induct Porter into the Country Music Hall of Fame in 2002, and joined his family to say goodbye when he passed away in 2007.

Just Between You and Me features every track from the duo's 13 albums, several compilation-only tracks, a few rarities - namely a 45 RPM single recorded in honor of The American Freedom Train that ran for the country's bicentennial and live cuts from 1970's A Real Live Dolly - and 13 unreleased tracks, including alternate takes. Alanna Nash, author of 1978's Dolly: The Biography, pens the set's liner notes.

The box is available May 5. Order it here and hit the jump for a complete track list! (Thanks to super reader Richard Eric for the tip!)