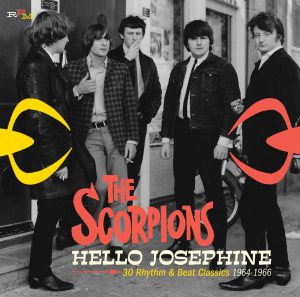 Our RPM Records round-up continues with news of two anthologies sure to interest any fans and collectors of mid-sixties British pop.

The Scorpions of Hello, Josephine – 30 Rhythm and Beat Classics 1964-1966 aren’t to be confused with the German metal band or even the British instrumental trio from the early sixties. These Scorpions were a beat band from Manchester, the same stomping ground as The Hollies. But Peter Lewis (vocals), Tony Briley (bass), Mike Delaney (drums), Tony Postill (lead guitar) and Rodney Postill (rhythm guitar) didn’t find success in their native England. Instead, they made a name for themselves in Holland! RPM’s new collection sheds light on this “lost” beat group.

Just months after the band was formed, Dutch audiences discovered The Scorpions on the country’s stages in summer 1964. They were signed to the CNR label almost immediately, and released their first single (“Bye Bye Johnny” b/w “Rip It Up”) in August. With their selection of songs by Chuck Berry and Little Richard, The Scorpions revealed their roots in American R&B, and the group followed up the 45 with covers of songs by Doris Troy (“Just One Look”), Ray Charles (“What’d I Say”) and Berry again (“Johnny B. Goode”). In late ’64, The Scorpions endured some personnel shifts: Tony Briley left the band, Rodney Postill took over on bass, Tony Postill switched from lead to rhythm guitar, and Terry Morton joined on lead guitar. But the new line-up scored big with December’s release of Fats Domino’s “Hello, Josephine.” It remained in the Dutch charts for 33 weeks, peaking at No. 2. Its follow-up was naturally also titled after a gal, and “Ann-Louise” also made the Top 40.

Further troubles plagued The Scorpions after this initial burst of success, however. Mike Delaney was replaced in 1965 by Ian “Skins” Lucas (who, like Morton, was an alumnus of Wayne Fontana and The Jets). A third hit record – an adaptation of “Greensleeves” inspired by the arrangement of The Country Gentlemen, another old band of Morton’s – made No. 22 in the summer, but soon, the band was forced to return to England when the members’ work permits expired. Morton and the Postills both gave up, leaving Peter Lewis and Ian Lucas to soldier on with new members Graham Lee (guitar/vocals), Dave Vernon (bass) and Roy Smithson (organ/vocals). This group of Scorpions recorded the optimistically-titled album Climbing the Charts, and the single “Balla, Balla” b/w “I’ve Got My Mojo Working” gave them another Top 20 hit. Still more comings and goings threatened to derail The Scorpions’ career, and the group was briefly rechristened The New Scorpions by its record label. Another album arrived in late 1966, but the band finally called it a day the next year when they were once again forced to return to England.

After the jump, there’s more on The Scorpions – plus The Complete Recordings of the Pied Piper himself, Crispian St. Peters!

There was one interesting postscript, however. In 1977, members of The Scorpions reunited on a Dutch television program entitled The Day The Music Died, which aired on August 18, shortly after Elvis Presley’s death. Two weeks later, “Hello, Josephine” re-entered the Dutch charts, and made it back to the Top 10. Peter Lewis and Graham Lee led the band for a new album, and The Scorpions were reactivated until disbanding once again in 1979. But you can’t keep a good band down, and Lee returned with new Scorpions in 2006; two more albums have since arrived under the band name.  RPM’s 30-track, non-chronologically-arranged anthology, compiled by John Reed, contains a sampling of the group’s singles as well as selections from the LPs Climbing the Charts (1965) and Keep in Touch with the Scorpions (1966). Olaf Owre supplies a comprehensive essay on the band’s history, and Simon Murphy has remastered. 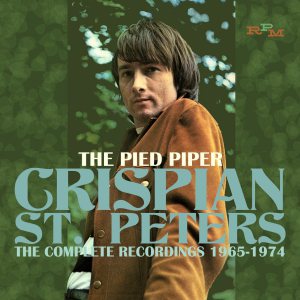 Crispian St. Peters, born Robin Peter Smith in 1939, is best known for his 1966 single “The Pied Piper” which went Top 5 on both sides of the Atlantic. So it’s no surprise, then, that RPM’s new complete collection dedicated to St. Peters’ folk-pop recordings is entitled The Pied Piper: The Complete Recordings 1965-1974. Over two CDs and 50 recordings, it presents the most comprehensive overview of the singer-songwriter’s most prolific and beloved period.

Like so many before (and after him), St. Peters’ solo career only took flight after he had served in bands including the Hard Travellers, The Country Gentlemen, Beat Formula Three and Peter and the Wolves. The patronage of EMI’s David Nicolson led to a Decca contract (Jamie in the U.S.) in 1965, and in 1966, he scored all three of the hits for which he would be remembered. First was “You Were on My Mind,” written by Sylvia Tyson of the folk duo Ian and Sylvia. Though it reached No. 2 in the U.K., St. Peters’ rendition of the song was eclipsed in the U.S. by that of We Five, who took it all the way to No. 3. But only Crispian’s version can boast Vic Flick (“The James Bond Theme”) on lead guitar and future Led Zeppelin star Jimmy Page on rhythm guitar! His follow-up to “You Were on My Mind,” however, struck gold.

“The Pied Piper” was first recorded by its authors, Artie Kornfeld and Steve Duboff (“The Rain, The Park and Other Things”) as The Changin’ Times. St. Peters’ catchy cover went to No. 4 in the U.S. and No. 5 in the U.K., not to mention all the way to the top in Canada. Soon, St. Peters’ “The Pied Piper” was inspiring further covers in multiple languages across the globe; even reggae and ska artists found it ripe for reinvention. But “The Pied Piper” was a hard act, well, to follow. St. Peters’ final hit came just months later with a cover of Phil Ochs’ “Changes,” which only reached No. 57 in America and No. 47 in England. But there was a silver lining in the U.S. when his “You Were on My Mind” received a second life and went Top 40 on the strength of “Pied Piper.” A return to the Kornfeld/Duboff songbook with 1967 single “Free Spirit” couldn’t return the artist back to the top of the pops. In an effort to re-establish the singer, he released one single under the alias of Country Smith, but the public didn’t cotton to that, either.

His most enduring achievement, “Piper” was included on St. Peters’ 1966 debut LP, Follow Me. It’s included in its entirety on The Complete Recordings along with his second solo album. Simply Crispian St. Peters, from 1970 on the Square Records label, was arranged and conducted by Big Jim Sullivan and featured Vic Flick and Nicky Hopkins. St. Peters’ subsequent recordings with the band Wheels aren’t included here; nor is a novelty one-off single spoofing Richard Nixon entitled “R.D.M. (Richard’s Driving Machine).” The final single here is 1974’s “Do Daddy Do” b/w “Every Time You Sinned,” originally issued on the Santa Ponsa label.

Crispian St. Peters struggled with mental and physical health as the 1970s continued, but he returned to making music with projects such as 1986’s The Gospel Tape and 1990’s New Tracks on Old Lines. He died in 2010 after suffering health setbacks including strokes and partial paralysis. Here, then, is a packed anthology of the folk-rock Pied Piper’s best work at Decca and Square from the period when his star burned brightly, annotated by John Reed) in a deluxe 16-page booklet and remastered by Simon Murphy.

Both The Scorpions’ Hello Josephine and Crispian St. Peters’ The Pied Piper are available now and can be ordered at the links below!

All tracks originally released on the CNR label.

All tracks originally released on Decca unless otherwise indicated.