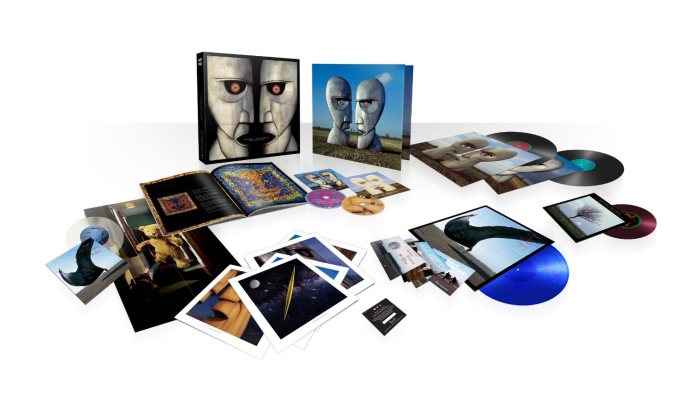 All has largely been quiet on the Pink Floyd front since the early 2012 release of the Immersion (mega-box) and Experience (trimmed-down but still deluxe) Edition sets for 1979’s The Wall.  The releases for The Wall concluded a campaign that also saw Discovery Edition (standard) remasters of all of the group’s albums and lavish sets for The Dark Side of the Moon and Wish You Were Here.  Today, the Floyd camp announced a new 20th anniversary box set for the band’s fourteenth and final studio album to date, 1994’s The Division Bell. Though there’s no mention of Immersion or Experience anywhere, the Division Bell box, due on July 1 from Parlophone, will feature an array of music and swag to make it a fitting companion to the previous Immersion boxes.

Originally released in the U.K. by the EMI label and in the U.S. by Columbia Records, The Division Bell was the second Pink Floyd studio album following the departure from the band of Roger Waters.  Though the musical auteur Waters was not involved, the album was very much in the vein of the classic-era Floyd concept albums.  This time, David Gilmour, Richard Wright and Nick Mason explored the importance of communication.  Gilmour co-produced the album with Bob Ezrin (The Wall, Alice Cooper, KISS) and had a hand in writing all but one track.  Wright co-wrote a number of the tracks with Gilmour, and one with Anthony Moore, and also provided his first lead vocal on a Pink Floyd album since The Dark Side of the Moon.  Other lyrics were provided by Gilmour’s wife Polly Samson and Nick Laird-Clowes; Ezrin co-wrote music for one song.  Michael Kamen contributed orchestral arrangements to the album.

The Division Bell reached a peak of No. 1 in both the U.K. and the U.S., where it has been certified three-times platinum.  Just two days after the album’s release, Pink Floyd launched a tour in support of it.  The Pulse live album (1995) documented this tour.  When the tour ended on October 29, 1994, it was Floyd’s final live performance until the 2005 Live 8 concerts which reunited the band with Roger Waters.

After the jump: what will you find on the new box set?  (Hint: you won’t find any marbles.)

The 20th Anniversary Division Bell box will include the following:

Pink Floyd’s official online store is also selling the reissue in a number of bundles:

The vinyl edition of The Division Bell will be available as a stand-alone purchase, but no 20th Anniversary single-CD is being released, as the remaster is identical to that of the 2011 Discovery Edition of the album.  Unfortunately, for the time being, the Blu-ray with the surround mix will remain a box set exclusive.

The 20th Anniversary box set of The Division Bell is available on June 30 in the U.K. and July 1 in the U.S. from Parlophone, now part of Warner Music Group.  You can pre-order at the links below!