Brothers Don and Phil Everly successfully straddled the line between country and rock-and-roll (with a healthy dollop of R&B) beginning with their first hit record, 1957's "Bye Bye Love."  Still an oldies-radio staple today, the Felice and Boudleaux Bryant classic began a long stretch of successes for the duo.  Archie Bleyer, of Cadence Records, signed the boys in February 1957 and was keenly aware of their potential to appeal to both teenaged and adult markets.  At his behest, the Everlys recorded both rockers and ballads, bringing their lustrous, tight harmony blend to both styles. Bleyer's gambit worked. Hits like "Wake Up, Little Susie" and "When Will I Be Loved" merged classic country-and-western and rock-and-roll into an inspirational whole, while their longing, ethereal vocal blend on "All I Have to Do is Dream" and "Devoted to You" established them as timeless balladeers. Demon Music Group has recently celebrated the legacy of the Everlys with a quartet of releases: the 3-CD box set The Cadence Recordings and vinyl LPs of their Cadence albums The Everly Brothers and Songs Our Daddy Taught Us plus the newly-curated Singles.

The Everly Brothers came to Cadence Records with one single under the belt. Despite the lack of success for the Columbia release of "Keep A' Lovin' Me" and "The Sun Keeps Shining," Bleyer was keen to enter the country market and felt that the Everlys could provide his entrée. With publisher Wesley Rose's support, Bleyer signed Don and Phil and "Bye Bye Love" (provided to the duo by Rose) arrived on 45 RPM in April 1957. The infectious anthem featured four guitars, played by Don, Phil, Ray Edenton, and Chet Atkins, who had befriended the Everlys earlier in the decade. The quartet's little noise out of Nashville went all the way to No. 2 Pop, No. 1 Country, and No. 5 R&B. Their follow-up single, "Wake Up Little Susie," bested its predecessor by reaching the top of all three charts - a feat matched the next year by the gorgeous "All I Have to Do Is Dream." Both "Bye Bye Love" and "Wake Up Little Susie" were included on the brothers' debut Cadence LP, The Everly Brothers, released in December 1957. The self-titled album has been released by Demon both as a standalone LP (pressed on white vinyl) and as Disc One of the 3-CD box set. In addition to the two hits, it reflected the Everlys' love of R&B with covers of Little Richard ("Keep A Knockin'"), Ray Charles ("This Little Girl of Mine" and "Leave My Woman Alone") and Gene Vincent ("Be Bop A-Lula") while also featuring Don Everly originals ("Maybe Tomorrow," "I Wonder If I Care as Much," and "Should We Tell Him," the latter co-written with Phil) and another tune from the Bryants ("Brand New Heartache"). 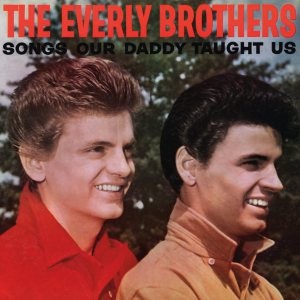 Whereas The Everly Brothers was a spirited collection, it couldn't have prepared listeners for its follow-up: Songs Our Daddy Taught Us. In August 1958, the Brothers' goofy novelty "Bird Dog" was ascending the pop charts, but far from repeating the formula, Don and Phil had something completely different and far more somber in mind. They entered RCA's Nashville studios armed with just two guitars, and were joined by producer Bleyer and bassist Floyd T. "Lightnin'" Chance. Rock and roll was not on their minds. Instead, they looked to assemble a collection primarily of traditional, often tragic, folk ballads, all rendered in seamless, tight harmony. The album was rounded out with a few non-traditional cuts. These songs fit right into the low-key, acoustic tone, including one co-written by the Singing Cowboy, Gene Autry ("That Silver Haired Daddy of Mine"), and another by Memphis songwriter Bob Miller ("Rockin' Alone in My Old Rockin' Chair"). The duo also revived Tex Ritter's 1946 hit "Long Time Gone." Everly patriarch Ike was credited with the arrangements for two of the tracks, "Barbara Allen" and "Put My Little Shoes Away."

Don and Phil (aged just 21 and 19, respectively) connected with this material on a deep level. No matter that the songs were about gambling, cold-blooded murder, incarceration and mortality. The beating heart of Don and Phil's sound was their deep respect for the music of the land: the rough-and-tumble, hardscrabble, homespun ballads they had learned as children in the Midwest. It was a concept album at a time when only Frank Sinatra was turning them out with regularity, and was "Americana" before the phrase had been coined. This melancholy classic wasn't their most popular album, but may well be their most personal and most important. (It's certainly among their most reissued, with both Bear Family and Varese Sarabande having addressed it in the past decade alone.) Like The Everly Brothers, Demon has reissued Songs Our Daddy Taught Us on (red) vinyl; it also comprises CD 2 of the box set.

The third disc of The Cadence Recordings presents 23 tracks: 14 singles and nine rarities. The singles encompass such key non-LP tracks as "All I Have to Do Is Dream," "Bird Dog," "Claudette," "Devoted to You," "'Til I Kissed You," "Let It Be Me," and "When Will I Be Loved." The rarities section rounds up a sampling of the many Cadence tracks originally released on various titles between 1985 and 2001 including demos (showcasing Phil and Don as songwriters) and alternate takes as well as the alternative version of "Poor Jenny" first released on a London American single.

Don and Phil Everly departed Cadence for the greener pastures of the Warner Bros. label in 1960, though Cadence continued to churn out albums for a time. While their Warner recordings would lead to moments of undisputed greatness, The Everly Brothers' legacy in large part rests upon their Cadence material. As such, The Cadence Recordings is a fine introduction to this seminal period. The clamshell case includes each disc in a mini-sleeve plus a 16-page booklet with sleeve notes from Alan Robinson. Phil Kinrade has remastered. Those who already own the numerous past anthologies of the Cadence era might understandably pass; everything from Cadence has been previously addressed on Bear Family's 1992 box Classic Everly Brothers in tandem with subsequent rarities collections and expanded editions from Bear Family and Varese Sarabande. But those who don't already own this music - the very bedrock of what would later be called Americana and country-rock - should have no qualms about snapping it up. The vinyl releases are handsomely done, as well, with Robinson's notes on the inner sleeves and Cadence-inspired labels on the disks. The sound is quiet and persuasive.

The Cadence Recordings and the three vinyl LPs are available now from Demon Music Group at the links below! Note that, due to territorial restrictions, these are not available directly from Amazon in North America, though various sellers will ship internationally.