While The Second Disc prides itself on connecting people to reissues and box sets they can keep on their shelves, it's no secret that listening audiences are also digital - catalogue music lovers, too - and our passion is connecting people to music from the past that they might adore. So we've introduced a new feature: The Weekend Stream, which focuses on hidden gems that recently made it to digital channels that might make your playlists a little brighter! Rick James, Glow (Deluxe Edition) /

END_OF_DOCUMENT_TOKEN_TO_BE_REPLACED

In late July 2020, in the midst of a global pandemic, The Psychedelic Furs released their first album in almost 30 years.  Made of Rain found original members Richard and Tim Butler, joined by Paul Garisto, Rich Good, Amanda Kramer, and Mars Williams, in top form.  Presumably there were plenty of fans ready to hear new Furs music after appearances of their classic songs in the film Call Me by Your Name and the television fantasy Stranger Things.  As of this writing, 1982's "Love My Way" as

END_OF_DOCUMENT_TOKEN_TO_BE_REPLACED

On March 20, as the severity of the COVID-19 pandemic was just starting to be understood, indie music retailer Bandcamp made the bold choice of waiving their share of revenue for artists and labels who were cancelling shows and delaying album releases left and right. The result was more music bought by more fans than any day on the site, a record broken on the first Friday of May. Bandcamp Fridays have since taken place in June and July - plus the first of an annual occurrence when the service

END_OF_DOCUMENT_TOKEN_TO_BE_REPLACED 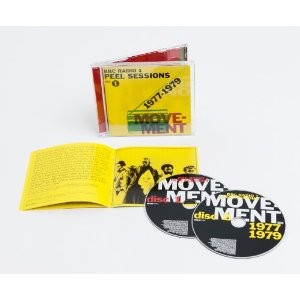 Last week's revelation that American media conglomerate Clear Channel had let go of dozens of local radio DJs made music fans yearn for the simpler times of when jockeys weren't limited to playlists from on high and could shape the public's music taste in a positive way. Ironically, as the Clear Channel news spread, EMI prepares the release of a new compilation devoted to one of England's most famous radio presenters, the late, great John Peel. Peel, a jockey on BBC's Radio 1 from 1967 until

END_OF_DOCUMENT_TOKEN_TO_BE_REPLACED

Aerosmith, Tough Love: Best of the Ballads (Geffen/UMe) Geffen augments the craziness of American Idol host/Aerosmith frontman Steven Tyler (who has a solo single out today) by putting out a compilation of the band's Geffen-era ballads hits ("Love in an Elevator" isn't a ballad in any configuration). Apparently it's only available at Target, so if you visit a local indie store you should be fine. (Official site) Booker T. & The MG's, McLemore Avenue / The Staple Singers, Be Altitude:

END_OF_DOCUMENT_TOKEN_TO_BE_REPLACED

Love 'em or hate 'em, the various budget compilations that come from the major labels are quick, easy ways to get catalogue material out to the masses. Universal's ICON and Sony's Playlist series are probably the highest-profile of these series, but the latter is arguably the more beloved of the two, thanks to a concerted effort by some of the producers at Legacy to get rarer tracks on the Playlist discs, whether it's a rare single version or bonus track from a previous reissue. Legacy has 12