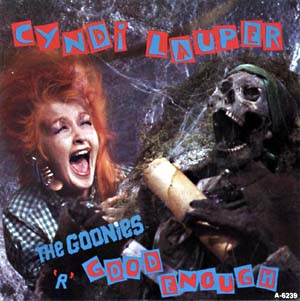 There’s nothing harder, as a reissue fan, than realizing that sometimes stuff just falls through the cracks and might have a tough time coming back up.

How many times have we all bought a compilation, expanded reissue or box set only to find that a few tracks were regrettably missing from the checklist? Few feelings are worse; you don’t want to hope for another reissue because that would be wasteful. You can just hope and hope that they’ll come out in some way, shape or form – and with any luck, they will.

A perfect example of this might be Cyndi Lauper, one of the most underrated female vocalists of the 1980s. You can see and hear her over-the-top but rather talented style in a lot of current female pop acts if you look hard enough (sure, Lady Gaga or Katy Perry might get the Madonna comparison a lot, but Madge had neither Lauper’s vocal range nor kooky fashion sense).

With that in mind, it’s odd to consider how little of her catalogue has been mined past the basic compilation approach. Legacy reissued She’s So Unusual some years ago with a bunch of live, vinyl-only bonus tracks. But Lauper was a staple in the mid-’80s, when dance remixes were perhaps at their most creative. Why the reissue of Unusual failed to include any of those mixes is beyond the comprehension of this catalogue correspondent. As Lauper’s career wore on, none of her ’80s records (True Colors (1986) and A Night to Remember (1989)) had the impact of her solo debut, so it’s hard to imagine those getting an expansion anytime soon.

So what’s the next step? A compilation probably makes sense, although you’re more likely to see such clearinghouse sets in Japan (such as Lauper’s own The Best Remixes in 1989). Still, Reissue Theory is all about the hope that some of the catalogue gatekeepers will make such a decision to free B-sides, remixes and rarities from obscurity. So in honor of that idea, here’s a look at some of Cyndi Lauper’s best single tracks, worthy for release on CD someday. Have fun (you know you wanna) after the jump.