It's not quite the summertime yet, but Legacy Recordings has some hot fun planned for Record Store Day thanks to a diverse slate of releases from A (Aerosmith) to, well, S (Sly and the Family Stone)!  April 20 is the date when Legacy will join 2013 Record Store Day Ambassador Jack White to celebrate not only those beloved black vinyl discs, but also the brick-and-mortar retail record store experience which we hold very dear at The Second Disc.

Titles for the sixth annual Record Store Day have already been announced from artists including Paul McCartney, Duran Duran and Hüsker Dü; we know that plenty more news is on the way, so stay tuned for more RSD scoops as they come!  In the meantime, hit the jump to find out just what goodies Legacy has in store for you!

The bad boys from Boston are back!  Aerosmith returns with 180-gram vinyl editions of the band's first three albums from 1973, 1974 and 1975, respectively!  Aerosmith introduced the world to the high-octane rockers with key tracks like "Dream On," while Get Your Wings proved the band had much more to offer than just "The Same Old Song and Dance."  Toys in the Attic marked an artistic and commercial peak for Steven Tyler, Joe Perry, Tom Hamilton, Joey Kramer and Brad Whitford as it introduced such hard-rock staples as "Walk This Way" and "Sweet Emotion."

The sophomore album from rap icons Cypress Hill, Black Sunday crossed over to the pop chart with a No. 1 debut on the Billboard 200 in 1993.  A double-LP set pressed on 180-gram vinyl awaits this landmark, Grammy-nominated album.

Legacy's acclaimed recent second installment of trumpet legend Miles Davis' Bootleg Series focused on the formative days of his electric period, but the label is turning the clock back to present three original mono LPs on 180-gram vinyl.  1956's Columbia debut Round About Midnight is joined by 1958's Milestones and 1961's Someday My Prince Will Come in a trio of vintage Davis classics.  Expect to hear some of the most influential jazz ever played.  Personnel across these albums include Cannonball Adderley, John Coltrane, Red Garland, Paul Chambers, Philly Joe Jones, Hank Mobley, Wynton Kelly and Jimmy Cobb!

Dust and Hard Attack, the 1971 and 1972 albums from the New York proto-metal outfit including Marc Bell, the future Marky Ramone, are being released on April 16 on CD and on Record Store Day on vinyl.  As with the CD, both Dust albums will be offered in one package, and the RSD vinyl edition includes an individually numbered jacket.  Read more here!

Following on the heels of People, Hell and Angels, Legacy and Experience Hendrix dip into the vaults for a mono treat: the original 1966 mixes of "Hey Joe" b/w "Stone Free," created for the Jimi Hendrix Experience's debut single in the U.K. and out-of-print for decades! 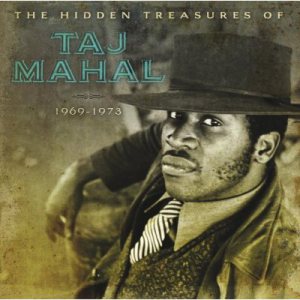 Blues icon Taj Mahal was recognized earlier this year with a Complete Columbia Albums box set, and for RSD, Legacy is presenting vinyl editions of two of Mahal's seminal albums.  His second album, 1968's The Natch'l Blues, is being reissued on 180-gram vinyl along with 2012's The Hidden Treasures of Taj Mahal, chronicling his musical exploits in the studio and onstage.

On April 2, a Deluxe Edition of Mad Season's only LP, 1995's Above, hits shops.  On April 20, the expanded version of the Seattle supergroup's album will also be available on vinyl.  Read the whole story right here!

Shuggie Otis hasn't released a solo album since 1974, but that's all about to change with the April 16 release of Wings of Love, a collection of previously unreleased material that will join 1974's Inspiration Information as a special 2-CD set.  If that's not enough Shuggie for you, though, Legacy is also offering a sampler for the artist on RSD.  Introducing Shuggie Otis, a 12" 180-gram vinyl release also containing an MP3 download card, includes ten tracks from the inspiring cult artist.

1993's No Alternative brought together a dazzling array of artists united in the fight against AIDS, and now the seminal benefit album is premiering for the very first time on vinyl.  No Alternative includes tracks from Matthew Sweet, Goo Goo Dolls, Smashing Pumpkins, Sarah McLachlan and Patti Smith, among many, many others.

The prolific Willie Nelson's latest album, Let's Face the Music and Dance, arrives in stores on April 30, just a couple of weeks before the troubadour turns 80.  But you can get the party started even earlier with the RSD release of the single "Roll Me Up and Smoke Me When I Die" featuring Kris Kristofferson, Jamey Johnson and Snoop Dogg (from Nelson's 2012 album Heroes).  For this RSD exclusive vinyl 7-inch, the B-side is a solo version of the song.  It's being pressed on (what else?) green vinyl!

Finally, Sly Stone and his family want to take you higher.  In anticipation of an upcoming box set already confirmed by Legacy, the label is presenting a 10" vinyl exclusive release for RSD.  Side One showcases a previously unreleased live medley of "Music Lover/I Want To Take You Higher/Music Love" along with the mono single master of "Higher," while Side Two includes a previously unreleased television medley of "Sing A Simple Song/Hot Fun In The Summertime/I Want To Take You Higher."