What kind of year will 2012 be?  If the first batch of releases, slated for January 30 release, from the Edsel label is any indication, there's plenty of rare and well-done music on the way! A three albums-on-two-CDs package collects the entirety of Todd Rundgren's Warner Bros. Records period.  A Cappella/Nearly Human/2nd Wind continues Edsel's definitive series which brings Rundgren's solo and Utopia output on both Bearsville and Warner Bros. under one umbrella.  The studio wizard's decision

END_OF_DOCUMENT_TOKEN_TO_BE_REPLACED

Welcome back to our Second Disc Holiday Gift Guide, in which we review some titles we might have missed over the past few weeks!  The titles we’re spotlighting in this occasional series just might be candidates on your own holiday shopping list! Tony Bennett’s heart may be in San Francisco, but his soul can be found in a case measuring roughly 11 x 5.5 x 5.5 inches.  For within those modest dimensions is housed some 65 years of music, spanning 1946 to 2011, over 73 CDs and 3 DVDs.  And

END_OF_DOCUMENT_TOKEN_TO_BE_REPLACED

UPDATE: Doris Day Opens The Vaults For “My Heart” and There's Plenty For Beach Boys Fans, Album Gets U.S. Release

The vault has finally been opened!  Sony Music U.K. has confirmed a release date and track listing for singing legend Doris Day’s long-awaited My Heart, on which your humble correspondent first reported in August 2010 and revisited back in November!  Thanks to the fine folks at Doris Day Tribute for spreading this news!  My Heart marks Doris’ first album of original studio material in some seventeen years, since The Love Album, and it features a number of tracks that will be of interest to the

END_OF_DOCUMENT_TOKEN_TO_BE_REPLACED

There’s simply no getting around it: Frank Sinatra is the voice of the Great American Songbook.  That’s not to discount the dozens of other significant voices that brought life to the House That George, Ira, Irving, Cole, Jerome, Richard and Lorenz Built.  (Again, just to name a few.)  But Frank Sinatra’s voice, as well as his persona, has become such a deeply ingrained part of the American musical fabric that it’s hard to find new ways to present it.  The body of work created by Sinatra at

END_OF_DOCUMENT_TOKEN_TO_BE_REPLACED

When Frank Sinatra met Count Basie, it was far from a clash of the titans.  No, the "historic musical first" that occurred between the grooves of Reprise 1008 in 1962 was more like a perfect union.  Both were Jersey boys, with Basie's formative years spent south of Hoboken, in Red Bank, New Jersey.  The men were unusually simpatico, similar in their enormous respect for musicians.  Though Basie titled a 1959 album Chairman of the Board, the title was later bestowed upon Sinatra.  When Basie put

END_OF_DOCUMENT_TOKEN_TO_BE_REPLACED

Ring-a-ding ding!  It can be used as an adjective or an interjection.  But when Frank Sinatra chose the expression to title his very first album for his very own label, it was simply an ecstatic expression of pure joy.  Sinatra was no longer tethered to Capitol Records, the label at which he'd made history with a series of "concept" albums.  He had the freedom to make some new history, his way, when he launched Reprise.  And Ring-a-Ding Ding!, now reissued and remastered for its 50th anniversary

END_OF_DOCUMENT_TOKEN_TO_BE_REPLACED

Dean Martin once implored in song, "Please don't talk about me when I'm gone." Dino has been gone since 1995, but I doubt he'd mind that fans and collectors alike haven't stopped talking about him since. Part of this is due to the seemingly endless stream of repackaged "greatest hits" collections - and guess what? Not one, not two, but three such sets are on the way this June, just in time for Father's Day. Now ain't that a kick in the head! Back in February, we reported on Hip-o's two-CD,

END_OF_DOCUMENT_TOKEN_TO_BE_REPLACED 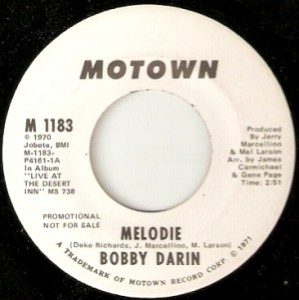 Welcome to another installment of Reissue Theory, where we reflect on great albums and the reissues they could someday see. At the time of his untimely death in 1973, Bobby Darin was signed to Motown Records, where he recorded one solo LP and enough material for a posthumous second LP. Despite their high quality, Darin's Motown recordings have long been unavailable. Today's Reissue Theory takes us back to 1970 and the final chapter in the life of the great Bobby Darin. Bobby Darin was so much

END_OF_DOCUMENT_TOKEN_TO_BE_REPLACED 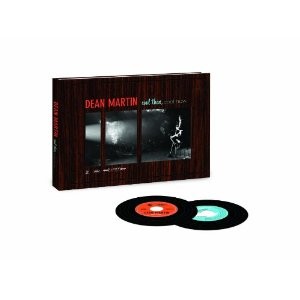 Don't move those Bear Family boxes over quite yet, Dean Martin fans. Between 1997 and 2001, the German label issued four remarkable boxes collecting virtually every note ever recorded by Dean Martin not only for Capitol and Reprise (his two most famous label associations) but for Diamond, Embassy, Apollo, Warner Bros. and MCA. So what could a new box offer to collectors and fans? On June 7, Hip-o will release a two-CD box set dedicated to the perennially cool singer and swinger in a hardcover

END_OF_DOCUMENT_TOKEN_TO_BE_REPLACED 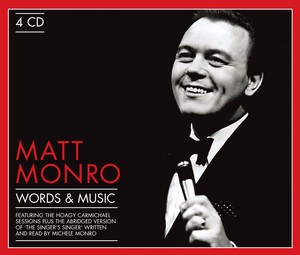 The success story of Matt Monro is one unlike any other. The singer, born Terence Edward Parsons in London in 1930, had recorded for both Decca and Fontana, and sang regularly on the BBC, but the brass ring eluded him. Then, in 1960, EMI producer George Martin was seeking a voice to spoof Frank Sinatra’s on a Peter Sellers comedy album cheekily titled Songs for Swinging Sellers. Martin hired Matt Monro, and billed him under the very Sellers-esque pseudonym of “Fred Flange.” Well, the “Flange”

END_OF_DOCUMENT_TOKEN_TO_BE_REPLACED

Welcome to another installment of Reissue Theory, here we reflect on well-known albums of the past and the reissues they could someday see. Today, we look at a beloved American icon and one of the least anthologized periods of his lengthy career. There may be no figure in American popular culture more maligned in death than Sammy Davis, Jr. The image of the diminutive entertainer, clad in open shirts and bell-bottoms, wearing beads and gold chains, and with an ever-present cigarette dangling

END_OF_DOCUMENT_TOKEN_TO_BE_REPLACED

Review: Nat "King" Cole, "Love is the Thing" and "The Very Thought of You"

The time is 1957. The place is the corner of Hollywood and Vine in Los Angeles, California – the Capitol Tower. And you are there. Such is the magic of Analogue Productions’ pair of hybrid Super Audio CDs, part of the label’s Nat “King” Cole reissue program. Thanks to the gorgeous remastering and improved quality afforded by the format, you’ll hear every breath, as if you were in the studio alongside Cole himself during a recording session. The versatile artist is today remembered for many

END_OF_DOCUMENT_TOKEN_TO_BE_REPLACED

Welcome to another installment of Reissue Theory, where we reflect on well-known albums of the past and the reissues they could someday see. This installment spins what may be the least-loved Tony Bennett LP into a lost classic for the ages. Today's Reissue Theory takes a look at one of the most reviled albums of all time, the LP thought to be the nadir of a career still going strong after nearly 50 years. The artist is Tony Bennett, and the album is Tony Sings the Great Hits of Today! ,

END_OF_DOCUMENT_TOKEN_TO_BE_REPLACED

Frank Sinatra was always one to face the world head-on. So it was with his turning 50. The man who had pioneered the “concept album” with a string of themed records for Capitol began thinking of an LP that would allow him to plant his feet squarely in the present, 1965, and reflect with every ounce of experience he’d acquired in the many lives he’d led over a mere 50 years. The album that would become September of My Years began its life inspired by Kurt Weill and Maxwell Anderson’s “September

END_OF_DOCUMENT_TOKEN_TO_BE_REPLACED

"Tall and tan and young and handsome..." Those lyrics to Antonio Carlos Jobim's "The Boy from Ipanema" kicked off a bossa nova boom that saw virtually every noteworthy vocalist and jazz musician of the 1960s recording in the mellow Brazilian style. Frank Sinatra, though, was hardly one to follow a trend for hipness' sake. By 1967, the label he founded, Reprise, was turning its sights to Laurel Canyon and Haight-Ashbury, and the bossa craze was on the wane. Sinatra would, as always, record on his

END_OF_DOCUMENT_TOKEN_TO_BE_REPLACED

Leave it to Bob Dylan.  In his 2004 memoir Chronicles Volume One, he writes about the experience of listening to Judy Garland: "A couple of times I dropped a coin right into the slot and played 'The Man That Got Away' by Judy Garland.  The song always did something to me...listening to Judy was like listening to the girl next door."  He writes of the song's composer, Harold Arlen: "In Harold's songs, I could hear rural blues and folk music...there was an emotional kinship there."  He continues,

END_OF_DOCUMENT_TOKEN_TO_BE_REPLACED

As previously mentioned, Hip-O Select had yet another release up their sleeve: Lena Horne Sings: The M-G-M Singles Collection. It's a set of 16 early Lena Horne classics cut for M-G-M Records in the '40s and '50s and largely unavailable on CD until now. There's a heap of standards, including "'Deed I Do," "Where or When," "I've Got the World on a String" and "The Lady is a Tramp," plus liner notes from Horne biographer James Gavin. Pre-order it here and hit the jump for some specs (culled