END_OF_DOCUMENT_TOKEN_TO_BE_REPLACED

As temperatures continue to drop here in the northeast where The Second Disc HQ is stationed, Real Gone Music have announced two reissues that will be good company on a day spent indoors.  On January 25, the label will release a 2-LP white vinyl edition of the Love Actually soundtrack in its first-ever vinyl pressing, plus a 3-CD reissue of a hard-to-find Grateful Dead concert collection, Road Trips, Vol. 3, No. 4. With an endearing and clever plot featuring ten interlocking stories and

END_OF_DOCUMENT_TOKEN_TO_BE_REPLACED

With an endearing and clever plot featuring ten interlocking stories and star-studded cast of Hugh Grant, Emma Thompson, Keira Knightley, Colin Firth, Liam Neeson, and many more, Love Actually has become one of the most acclaimed romantic comedies of the last twenty years.  But also key to its success and longevity is its remarkable soundtrack.  As director Richard Curtis put it:  "Without its music, Love Actually wouldn't work at all. I know--because I saw the film without the music, and it's a

END_OF_DOCUMENT_TOKEN_TO_BE_REPLACED

We're just a few weeks from the 55th Annual Grammy Awards - or as I like to call it, "how many times can my music geek friends and I make cutting jokes on the Internet?" - and, as is customary, next week will see the release of a compilation of Grammy-nominated songs for your perusal. The 22-track compilation, distributed this year by EMI, has quite the cross-section of cuts from what is a rather diverse year for the awards ceremony. Altogether, six different artists - Dan Auerbach of the

END_OF_DOCUMENT_TOKEN_TO_BE_REPLACED 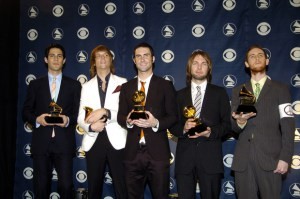 As crazy as it may sound, the debut album by pop-rock band Maroon 5 is turning 10 this year, and the band is picking a strange time to commemorate it. The band and their label, A&M/Octone, are partnering to release a double-disc expanded edition of 2002's Songs About Jane featuring "original demos, unreleased material and videos." The set will be released to general retail on June 5; a deluxe bundle, available on the band's website, also comes with a bonus lithograph "incorporating original