What do you get when you bring together members of Wilco, Soul Asylum, and The Jayhawks and throw them into a remote recording studio in Minnesota wilderness? Well, as the Run Out Groove label proved with its LP reissue earlier this year, the result is one mighty down-home, fun album of country-rock grooves: Down By the Old Mainstream by '90s supergroup Golden Smog. While their lineup has been mercurial since they first got together in the late-'80s, the core lineup included Kraig Johnson of

END_OF_DOCUMENT_TOKEN_TO_BE_REPLACED

Years after their early major label discography was expanded on CD by Legacy Recordings, the remainder of the alt-country band's output for the American Recordings label will be remastered and expanded by Universal this summer. The band's last three albums for American - Sound of Lies (1997), Smile (2000) and Rainy Day Music (2003) - caught the band in an interesting time of transition. Marc Olson, who with Gary Louris formed the band's primary singer/songwriter/guitarist unit, unexpectedly

END_OF_DOCUMENT_TOKEN_TO_BE_REPLACED

Today is the day for a 2-CD/1-DVD set of previously unissued live performances from the band Incubus. Celebrating their twentieth year together, Incubus is launching a 4-week, 18-city tour co-headlining with Linkin Park. The tour kicks off tonight in Boston, Massachusetts, but the performances on Incubus HQ Live date from one year ago, recorded in West Hollywood, California.  That was when the band set up shop at a storefront on La Brea Avenue for seven special nights of performances.   HQ Live

END_OF_DOCUMENT_TOKEN_TO_BE_REPLACED

"Please don't call it 'alt-country!'," pleads The Jayhawks' archivist P.D. Larson in the liner notes to the new Legacy Edition of the band's fourth album, 1995's Tomorrow the Green Grass. But whatever you call it, the uniquely American music of the Jayhawks has endured, and is currently being celebrated by American Recordings and Sony/Legacy with two deluxe reissues produced by Larson and John Jackson. The band's major label debut from 1992, Hollywood Town Hall, has been expanded with a clutch

END_OF_DOCUMENT_TOKEN_TO_BE_REPLACED

The Jayhawks, Hollywood Town Hall: Expanded Edition / Tomorrow the Green Grass: Legacy Edition (Columbia/Legacy) After months of waiting, alt-country fans get expanded versions of two Jayhawks LPs, including a deluxe set of Tomorrow the Green Grass with a host of previously unreleased demos. (Official site) Pearl Jam, Live on Ten Legs (Monkeywrench) The first volley in the iconic band's PJ20 campaign honoring their 20th anniversary is a self-released chronicle of their live tours from 2003 to

END_OF_DOCUMENT_TOKEN_TO_BE_REPLACED 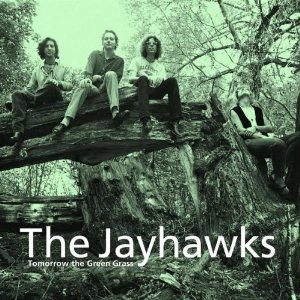 We may have only fleetingly mentioned these before, but Legacy has prepped expanded reissues of Hollywood Town Hall and Tomorrow the Green Grass, the first two records that alt-country rockers The Jayhawks recorded for the American Recordings label in the early 1990s. Hollywood Town Hall, released in 1992, will feature five bonus tracks (two of which are unreleased) while Tomorrow the Green Grass (1995) will be presented as a double-disc Legacy Edition with a heap of bonus cuts, 20 of them

END_OF_DOCUMENT_TOKEN_TO_BE_REPLACED

This was a busy week for catalogue fans, what with the Elvis revelation from the other day and reactions to the new Exile on Main St. sets. Here, to close out the week, are a few announcements that fell through the cracks. The long-planned Legacy Edition of Stevie Ray Vaughan and Double Trouble's 1985 sophomore LP Couldn't Stand the Weather now has a release date: July 27. The set will feature bonus tracks from the original recording sessions and a previously-unreleased live show on Disc 2.