Rhino's "Start Your Ear Off Right" campaign is back for 2018, and this year's crop of titles is a happily eclectic one ranging from classic R&B to rock, metal, hip-hop, and beyond.  These limited edition vinyl reissues will be released every Tuesday beginning tomorrow, January 9, and continuing through the 23rd.  We can't think of a better way to start our year off right than visiting a local record store, and Rhino agrees - so all of these titles will be exclusively available at

END_OF_DOCUMENT_TOKEN_TO_BE_REPLACED

Greek synthesizer legend Vangelis has recently overseen a CD box set of some of his most celebrated albums for release next year. Delectus features 13 Vangelis albums released between 1973 and 1985 for the Vertigo and Polydor labels. This includes studio creations like Earth (1973), China (1979), See You Later (1980), Soil Festivities (1984) and Mask (1985) plus soundtrack albums like the nature documentaries L'Apocalypse des animaux (1975), Opera Sauvage (1979) and Antarctica (1983) and the

END_OF_DOCUMENT_TOKEN_TO_BE_REPLACED

Celebrated Greek electronic composer Evangelos Odysseas Papathanassiou - or, as he's known to music lovers the world over, Vangelis - is partnering with the Cherry Red label Esoteric to remaster and reissue six of his albums originally released on the RCA and Arista labels. By the time Vangelis signed to RCA and released Heaven and Hell in 1975, he'd already traveled quite extensively in the European music scene. From a turn in Greek pop band The Forminx, he'd formed a prog band, Aphrodite's

END_OF_DOCUMENT_TOKEN_TO_BE_REPLACED

In lieu of a standard Release Round-Up this week, here's a look at the major three titles that are out today: the latest gold discs and SACDs from Audio Fidelity. The titles released today are Crosby, Stills & Nash's CSN, James Taylor's Gorilla and Vangelis' soundtrack album to Blade Runner. The third studio album by the folk-rock supergroup Crosby, Stills and Nash, released in 1977, is crucially different from the ones before - this time, there's no contribution from Neil Young. (Young

END_OF_DOCUMENT_TOKEN_TO_BE_REPLACED 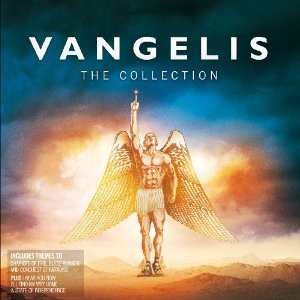 At this summer's Olympic Games in London, if there was going to be any film score coming through the speakers, it would be the theme to Chariots of Fire. Vangelis' synthesizer-based piece has resounded in the popular consciousness for more than 30 years. Running along a beach or looking for energy to complete a task? That piano riff - which helped the film win one of four Academy Awards and topped the Billboard charts for a week in 1982 - will likely play in your head until you finish the