Rhino, the label that manages the catalogue of the Warner family of labels, has announced its upcoming Record Store Day releases.  A mouth-watering 29 titles will hit shops on April 18, available exclusively at brick-and-mortar locations.  These include the previously announced David Bowie titles; a rare live set from Alice Cooper; rarities from Jethro Tull; a box of John Prine's early albums; a set of core Notorious BIG records; BBC sessions from The Pogues, New Order, and Hawkwind; a

END_OF_DOCUMENT_TOKEN_TO_BE_REPLACED

As has become an annual tradition, Rhino has kicked off the new year with another exciting slate of Start Your Ear Off Right releases.  The first few titles have already hit shelves, and more are on the way over the course of the month. Punk, new wave, counterculture rock, singer-songwriter classics, and sleek '80s pop hits...it's all part of this year's campaign.  Each week, a batch of these limited edition color vinyl pressings will be released to brick and mortar shops and a select few

END_OF_DOCUMENT_TOKEN_TO_BE_REPLACED

Fast and furious - that was the modus operandi of Johnny, Joey, Dee Dee, and Tommy Ramone when they hit U.K. concert stages in December 1977 in the wake of the November release of their third studio album, Rocket to Russia. The New Year's Eve gig at London's Rainbow Theatre provided the basis of It's Alive, issued in April 1979, with 28 songs comfortably packed onto less than 54 minutes of vinyl. Now, that singular document of the Ramones' electrifying performance has been revisited by Sire and

END_OF_DOCUMENT_TOKEN_TO_BE_REPLACED

Rhino's ongoing series of deluxe box sets celebrating the Ramones' legacy continues on September 20 with a fifth entry: the 40th anniversary 4CD/2LP edition of the band's 1979 live album It's Alive.  Recorded in London on New Year's Eve 1977 and released in April 1979, It's Alive featured blistering takes on songs from the band's first three studio albums.  Only the Ramones could have fit 28 songs onto less than 54 minutes of vinyl. Limited to 8,000 units, the It's Alive Deluxe Edition is

END_OF_DOCUMENT_TOKEN_TO_BE_REPLACED

Rhino's popular "Start Your Ear Off Right" vinyl reissue campaign is returning to local independent record stores and Barnes & Noble locations beginning next Tuesday, January 8, and continuing through Tuesday, January 29, with a new batch of limited (and often colorful) vinyl reissues arriving each week. Each group features an eclectic line-up drawn from the Rhino archives.  January 8 will see compilations from Aretha Franklin, Alice Cooper, and The Monkees, as well as a 1978 post-punk

END_OF_DOCUMENT_TOKEN_TO_BE_REPLACED

As we continue to look at the offerings for this Black Friday Record Store Day on November 23, here is a peek at the twelve titles Rhino will be releasing.  As always, these will be available exclusively at all finer independent music shops on Black Friday! The B-52's - Cosmic Thing The group's fifth album from 1989, featuring the hits "Love Shack" and "Roam."  Limited edition of 4,500 copies on 140-gram rainbow colored vinyl. Devo - Q: Are We Not Men? A: We Are Devo! Devo's debut album,

END_OF_DOCUMENT_TOKEN_TO_BE_REPLACED

The Ramones entered New York's Mediasound Studios in May 1978 with their mission clearly laid out: to achieve radio airplay and mainstream success without sacrificing their punk values.  It wasn't such a far-fetched idea; a love of '60s pop had been ingrained in the band since their debut.  For their fourth album, Road to Ruin, the band would continue on the path blazed on 1977's Rocket to Russia with stronger playing, stronger production, stronger songwriting, bigger hooks, and more varied

END_OF_DOCUMENT_TOKEN_TO_BE_REPLACED

On September 22, 1978, The Ramones unleashed their fourth album on the world: Road to Ruin.  On September 21 of this year, almost forty years to the day, Rhino will reissue Road as part of the label's ongoing series of Ramones box sets.  It will arrive as a 3-CD/1-LP box set and a single-CD remaster of the original album. For Road to Ruin, Dee Dee, Joey, and Johnny were joined for the first time by drummer Marky Ramone (who replaced founder Tommy Ramone, who'd left the ranks to focus on

END_OF_DOCUMENT_TOKEN_TO_BE_REPLACED

Johnny, Joey, Dee Dee, and Tommy Ramone introduced their fast and furious style of bubblegum punk on 1976's Ramones, then followed it up the next year with the even more potent Leave Home.  Just months later, the band dropped its third major salvo.  With Rocket to Russia, the sound and feel of the band's first two albums was taken to the next level - and now, forty years later, it's often recognized as the finest Ramones set.  Happily, Rhino has continued its series of LP-sized, hardcover

END_OF_DOCUMENT_TOKEN_TO_BE_REPLACED

A third 40th anniversary deluxe edition is coming from the Ramones and Rhino, featuring the band's third album, Rocket To Russia. With punk rock reaching a fever pitch in the summer of 1977, the Queens quartet and Leave Home's producer and engineer, Tony Bongiovi and Ed Stasium, again came together to record another hard-hitting album of urgent but melodic tunes. Drawing from surf rock influences (and featuring a significantly bigger budget than their previous two records), Rocket To Russia

END_OF_DOCUMENT_TOKEN_TO_BE_REPLACED

The sophomore album from Forest Hills, Queens, New York's Ramones, Leave Home, arrived in January 1977 on Sire Records, just months after the April 1976 release of the band's self-titled debut.  Despite the title, however, Leave Home didn't mark a large stylistic leap or departure for the young punks out of their comfort zone.  On closer inspection, however, it continued the growth of the band.  Forty years later, it's easier to hear that progression than ever, thanks to a new, 3-CD/1-LP set

END_OF_DOCUMENT_TOKEN_TO_BE_REPLACED

Last year's deluxe 40th anniversary edition of the self-titled debut album by the Ramones looks to be the first in a series! Rhino Records today announced a rarity packed 3CD/1LP edition of the band's second album, 1977's Leave Home, for release this summer. Leave Home was a progression for the Forest Hills punk quartet: more diverse songs written independently by the band instead of devised in the studio; a budget nearly doubled from the sessions for Ramones (plus a big shot producer, Tony

END_OF_DOCUMENT_TOKEN_TO_BE_REPLACED

That chill in the air and the buzz in your favorite record store can only mean one thing: Record Store Day Black Friday is nearly upon us! On November 25, indie record retailers and labels great and small will partner together to issue dozens of exclusive packages you can't get anywhere else (except maybe eBay, after the fact, though we're not happy about that.) The vinyl boom refuses to end, but owing to the lesser size of the event in general, there don't seem to be as many titles as usual.

END_OF_DOCUMENT_TOKEN_TO_BE_REPLACED

Welcome to this week's Release Round-Up...one of the most packed in recent memory! Beatles, Live at the Hollywood Bowl (Apple/Capitol/UMe) CD: Amazon U.S. / Amazon U.K. / Amazon Canada  Vinyl: Amazon U.S. / Amazon U.K. / Amazon Canada Since the advent of the compact disc era, The Beatles at the Hollywood Bowl has been the forgotten stepchild of the Fab Four's legendary catalogue.  That changes today with the first-ever commercial CD/DD release of the 1977 album on September 9 via

END_OF_DOCUMENT_TOKEN_TO_BE_REPLACED

It was unlike anything audiences had heard or seen: four leather jacket-clad, shaggy-haired ne'er do wells from Forest Hills, Queens, offering loud bursts of sneering rock and roll as grimy as the streets they stumbled across. Almost no one knew it then, but this was a musical movement, as potent as Elvis Presley's first swivel or the first haze over Woodstock. Four decades later, Rhino Records celebrates the incredible legacy of the self-titled debut album by the Ramones with a 3CD/1LP box

END_OF_DOCUMENT_TOKEN_TO_BE_REPLACED

Rhino continues its affordable/collectible album box set streak with New York's own Ramones. The Sire Years 1976-1981 is just that: a box collating Joey, Johnny, Dee Dee, Tommy and (from 1978's Road to Ruin onward) Marky's first six albums for Seymour Stein's label - three hours of classics from one of the defining bands of the punk rock movement. Ramones (1976), Leave Home, Rocket to Russia (both 1977), Road to Ruin, the Phil Spector-produced End of the Century (1980) and Pleasant Dreams (1981)

END_OF_DOCUMENT_TOKEN_TO_BE_REPLACED 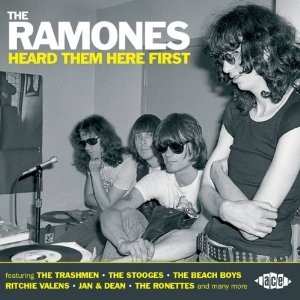 Freddie Mercury & Montserrat Caballé, Barcelona: Deluxe Edition (Island U.K.) The Queen frontman's final solo effort - an ambitious collaboration with a Spanish opera legend - has been given new life on CD, with its original synth instrumentation fully fleshed out by an orchestra. A super deluxe box includes scores of audiovisual extras, and the newly-orchestrated album is also available on vinyl. Judas Priest, Screaming for Vengeance: Special 30th Anniversary Edition (Columbia/Legacy) A