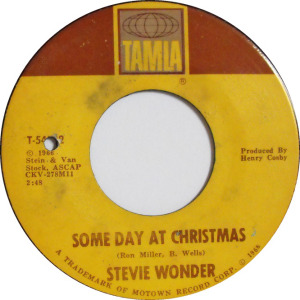 We're just about to put the "Closed" sign on the door of The Second Disc HQ, but should any of you stumble upon The Second Disc on Christmas, I want this to be the first thing you see for two reasons.

One, you're going to find a compendium below of all the Christmas articles Joe and myself have done this season. Let them fill you with Christmas cheer whenever you need some!

And second, and most importantly, may you, the treasured reader of The Second Disc, have a Merry, Merry Christmas and a happy holiday weekend. We're not going to take off a tremendous amount of time, but we're definitely going to rest and relax (and enjoy great music!) tomorrow and Sunday, and I hope you do the same - preferably with someone you love. If I may speak for both myself and Joe, we're continuously honored and thankful for your readership over what's almost been a full year - and 2011 will hopefully be an even bigger and better year for all of us as catalogue enthusiasts!

11/26: Mike imagines what a complete Waitresses set on CD would look like - with "Christmas Wrapping," of course.
11/29: Twenty-six years after its debut, Mike runs through the history of Band Aid.
12/03: Joe devotes the week's Friday Feature to Mr. Magoo's Christmas Carol and its score by Jule Styne and Bob Merrill.
12/06: Joe reviews Collector's Choice's new set from Bing Crosby, The Crosby Christmas Sessions.
12/07: A Back Tracks column from Joe on the holiday albums of Andy Williams. Also, Mike has some fun with the wintry albums of Bob and Doug McKenzie and asks (and solves, with your help) a mystery regarding WHAM! and "Last Christmas."
12/09: Joe returns with a Back Tracks on Johnny Mathis' Christmas discography.
12/11: A loving tribute from Mike on the music of one of his favorite Christmas films, Gremlins.
12/15: Another valuable Back Tracks from Joe - a definitive guide to The Beach Boys' holiday repertoire! Plus, Mike revisits Motown on Christmas with a look at the 1989 Motown holiday album.
12/22: Joe reviews Perry Como's Complete Christmas Collection from Collector's Choice.
12/24: In a mad festive dash, Mike reviewed La La Land's expanded Home Alone score and Hip-o Select's The Complete James Brown Christmas and pondered why The Beatles' Christmas flexi-discs still haven't found a home on CD.