Welcome to this week's Release Round-Up, featuring a selection of the new titles in stores today! Miles Davis, That's What Happened 1982-1985: The Bootleg Series Vol. 7 (Columbia/Legacy) 3CD: Amazon U.S. / Amazon U.K. / Amazon Canada 2LP Highlights: Amazon U.S. / Amazon U.K. / Amazon Canada The 3-CD box set (also available digitally) focuses on Miles Davis' final years at the Columbia label with which he had been associated since 1955 and on the three albums that closed out his

END_OF_DOCUMENT_TOKEN_TO_BE_REPLACED

We're counting down to Record Store Day 2022, scheduled for Saturday, April 23. Today, we're sharing the news from Demon Music Group.  Demon's 2022 lineup for the fifteenth annual RSD event has an impressive array of classic rock, soul, and pop from such artists as Donna Summer, Belinda Carlisle, T. Rex, Suede, Del Shannon (with a little help from Tom Petty and Jeff Lynne!), Pixies, Ace of Base, and Simple Minds, plus rarities from the archives of the BBC and Chi-Sound Records. Below, you'll

END_OF_DOCUMENT_TOKEN_TO_BE_REPLACED

Welcome to this week's Release Round-Up! Chicago, Chicago at Carnegie Hall: Complete (Rhino) (Rhino.com) For the first time, Rhino brings together all eight of Chicago's concerts between April 5-10, 1971 at New York's Carnegie Hall in one deluxe, 16-CD box set.  The original 4-LP box Chicago at Carnegie Hall was a commercial smash, reaching No. 3 on the Billboard 200.  This set features every note played by the band as newly restored by the band's Lee Loughnane and engineer Tim

END_OF_DOCUMENT_TOKEN_TO_BE_REPLACED

We're continuing our Record Store Day 2020 spotlights with a look at what Demon Music Group has on offer for RSD in the U.K. (with many titles available worldwide)!  The label's 15 titles encompass classic rock and pop titles plus comedy, spoken-word, a lost Doctor Who series, and much more.  Remember: releases are available while supplies last at your preferred brick-and-mortar record store on Saturday, April 18!  The descriptions to follow have been provided by Demon. Bob Mould - Circle of

END_OF_DOCUMENT_TOKEN_TO_BE_REPLACED

In 1992, before Suede had even issued a single song, Melody Maker put the London group on its cover, deeming them "The Best New Band in Britain." With praise like that - and considering everything that followed - it's no surprise Edsel is reissuing the album as a multi-disc box set for its 25th anniversary in March. Suede: 25th Anniversary Silver Edition is the ultimate presentation of the group's chart-topping, Mercury Prize-winning, best-selling 1993 debut. It features the original album, a

END_OF_DOCUMENT_TOKEN_TO_BE_REPLACED

CONGRATULATIONS TO OUR WINNER, DAVE ROBERTS!  WATCH THIS SPACE FOR ANOTHER EXCITING CONTEST TOMORROW!

END_OF_DOCUMENT_TOKEN_TO_BE_REPLACED 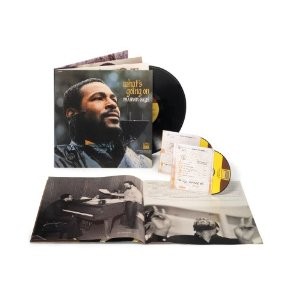 Marvin Gaye, What's Going On: 40th Anniversary Edition (Motown/UMe) Two CDs feature the original album and a host of rarities, single mixes, and all the best outtakes leading up to the making of this R&B classic (almost a dozen of which are unreleased). The deluxe package is rounded out by the great Detroit mix of the album on vinyl. (Check out our interview with Harry Weinger on the set!) (Amazon) Paul Simon, Paul Simon / There Goes Rhymin' Simon / In Concert: Live Rhymin' / Still Crazy

END_OF_DOCUMENT_TOKEN_TO_BE_REPLACED

Back in September, we reported on a hits/B-sides compilation for legendary Britpop band Suede. Now, the recently-reunited band have announced a major catalogue expansion through U.K. label Demon/Edsel. In five weeks starting May 30, the label will release massive three-disc editions of each of the band's studio LPs, from 1993's self-titled debut to 2002's A New Morning. The sets will feature two CDs featuring the remastered original albums, the band's many non-LP B-sides and many unreleased

END_OF_DOCUMENT_TOKEN_TO_BE_REPLACED

After a band makes its return to the public eye, say, after a long hiatus or break-up, the best way to remind the public of what they were capable of is through a compilation of some sort. Suede, the influential Britpop band, looks to do just that with the release of The Best of Suede. From their self-titled release in 1993, Suede were considered to be the act that got rock music back in the good graces of both British critics and the British public. With bands like Blur and Radiohead about to