After a series of smaller "Drops" over the past two years, Record Store Day is (mostly) back to a one-day event, and the big day is tomorrow: Saturday, April 23.  Over 250 titles will be available at independent stores everywhere - including some CD releases, too!  That's plenty of albums in almost every genre imaginable, so visit RecordStoreDay.com in the U.S., RecordStoreDay.co.uk in the U.K., and RecordStoreDayCanada.ca in Canada for the complete list, and sound off below as to which titles

END_OF_DOCUMENT_TOKEN_TO_BE_REPLACED

We're counting down to Record Store Day 2022, scheduled for Saturday, April 23. Today, we're sharing the news from Demon Music Group.  Demon's 2022 lineup for the fifteenth annual RSD event has an impressive array of classic rock, soul, and pop from such artists as Donna Summer, Belinda Carlisle, T. Rex, Suede, Del Shannon (with a little help from Tom Petty and Jeff Lynne!), Pixies, Ace of Base, and Simple Minds, plus rarities from the archives of the BBC and Chi-Sound Records. Below, you'll

END_OF_DOCUMENT_TOKEN_TO_BE_REPLACED

Welcome to this week's Release Round-Up! Cream, Goodbye Tour Live 1968 (Polydor/UMC) (Amazon U.S. / Amazon U.K. / Amazon Canada) This new 4-CD box set expands on Cream's farewell album Goodbye Cream, but with a twist: it drops the three studio tracks and instead presents four complete concerts including the Los Angeles Forum show from which the original three live cuts on Goodbye were culled. Overall, the book-style package has 36 tracks, 29 of which are premiering on CD. 19 of the

END_OF_DOCUMENT_TOKEN_TO_BE_REPLACED

On March 6, UMC will revisit Simple Minds' 1989 album with Street Fighting Years to the tune of a 4-CD box set.  The cinematic Trevor Horn and Stephen Lipson-produced LP featured the band's first U.K. No. 1, "Belfast Child," even as the group underwent personnel changes.  This expanded edition is the latest in UMC's ongoing Simple Minds reissue series and features a newly remastered version of the album (undertaken by Andrew Walters at Abbey Road Studios) alongside a disc of B-sides, edits and

END_OF_DOCUMENT_TOKEN_TO_BE_REPLACED

Welcome to this week's Release Round-Up. Here's what's due for March 29! John Coltrane, Coltrane '58: The Prestige Recordings [5 CD] (Craft Recordings) (Amazon U.S. / Amazon U.K. / Amazon Canada) The year 1958 was a breakout one for saxophone legend John Coltrane. It marked the year when Coltrane--already well-established as a talented sideman--began to make a name for himself as a solo musician and developed his signature "sheets of sound" style while exploring many other routes.  To

END_OF_DOCUMENT_TOKEN_TO_BE_REPLACED

Scottish rockers Simple Minds will celebrate their smash album New Gold Dream (81-82-83-84) with a sprawling deluxe edition this summer. Released in the fall of 1982, New Gold Dream, Simple Minds' fifth studio effort, took the band to their highest summit yet as a rock ensemble. "Promised You a Miracle," "Glittering Prize" and "Someone Somewhere in Summertime" were their first three U.K. Top 40 hits, while the album peaked at No. 3. "Promised You a Miracle" got the group their debut

END_OF_DOCUMENT_TOKEN_TO_BE_REPLACED

Well, this is it - the final big release week of the year!  While next week will see releases slow to a trickle, this week is packed with exciting box sets and much more! Bruce Springsteen, The Ties That Bind: The River Collection (Columbia) 4-CD/3-DVD: Amazon U.S. / Amazon Canada 4-CD/2-BD: Amazon U.S. / Amazon Canada This 4-CD/3-DVD or 4-CD/2-BD set celebrating The Boss' seminal album The River features a treasure trove of previously unreleased material across its 53 audio tracks

END_OF_DOCUMENT_TOKEN_TO_BE_REPLACED

This week's Release Round-Up has box sets and deluxe editions a-plenty... The Pretty Things, Bouquets from a Cloudy Sky (Snapper) (Amazon U.S. / Amazon U.K.) This box set is much in the style of last year's Small Faces set Here Come the Nice, and contains 11 studio albums on CD with 42 bonus tracks, two rarities CDs with 45 previously unreleased tracks, 2 DVDs including a new documentary by Reelin' in the Years Productions, a 10-inch replica acetate disc, posters, an art print, and a

END_OF_DOCUMENT_TOKEN_TO_BE_REPLACED

Virgin Records, one of England's most iconic labels, turns 40 this year - and they're celebrating with a new compilation full of hits from their storied existence. The Virgin label was largely the brainchild of one young businessman named Richard Branson. The London-born Branson began his career selling records by mail order and later opening a shop on Oxford Street. The Virgin label was blessed with early success thanks to a willingness to sign acts that major U.K. labels were keen to dismiss.

END_OF_DOCUMENT_TOKEN_TO_BE_REPLACED

The S.O.S. Band / Cherrelle / Alexander O'Neal, "Tabu Reborn" Vinyl Editions (Wave 1) (Tabu/Edsel) The start of a lengthy reissue campaign from Demon Music Group, these are 180-gram vinyl reissues of The S.O.S. Band's III (1982), Cherrelle's 1984 debut Fragile, and Alexander O'Neal's self-titled debut from 1985. Expanded editions of these albums come out on CD next week, followed by a great many more waves of product throughout 2013 and into 2014! S.O.S. Band: Amazon U.S. / Amazon

END_OF_DOCUMENT_TOKEN_TO_BE_REPLACED

Scottish rock/New Wave band Simple Minds have been together in some form or another since 1977, and that near-35-year run of singles is about to be commemorated this spring with a new greatest hits set. Celebrate: The Greatest Hits+ will be available as a double or triple-disc set in March, and will feature, depending on which version you buy, up to 50 tracks from the group. The set spans the band's entire run, from their early years on Zoom/Arista at the tail end of the 1970s and beginning of

END_OF_DOCUMENT_TOKEN_TO_BE_REPLACED

Various Artists, ZTT: The Art of the 12": Volume Two (ZTT/Salvo) A double-disc set of rare and unreleased dance mixes of vinyl classics, with a few rarities thrown in for good measure - and, as our post later today will explain, at least one Beatle! Simple Minds, Simple Minds x5 (EMI) The first five Simple Minds LPs - all pre-The Breakfast Club - expanded with vintage B-sides and remixes. Gilbert O'Sullivan, Back to Front: Expanded Edition (Union Square Music/Salvo) Gilbert's 1972

END_OF_DOCUMENT_TOKEN_TO_BE_REPLACED 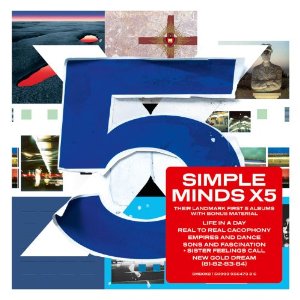 In 1985, Scottish rockers Simple Minds burst onto the American music scene in a big way with "Don't You (Forget About Me)," the chart-topping theme to iconic teen drama The Breakfast Club. Before their brush with John Hughes-induced fame, though, the band released a batch of increasingly successful post-punk and New Wave records between 1979 and 1982. This winter, to coincide with the "5x5 Tour" in Europe, which will see founding members - singer Jim Kerr and guitarist Charlie Burchill -