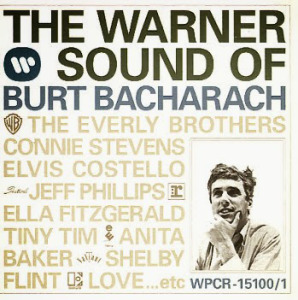 In his 85th year, Burt Bacharach has kept a pace that would wear out many a younger man.  In addition to performing a number of concert engagements, the Oscar, Grammy and Gershwin Prize-winning composer has released a memoir, continued work on three musical theatre projects, co-written songs with Bernie Taupin and J.D. Souther, and even penned a melody for Japanese singer Ringo Sheena.  Though Bacharach keeps moving forward, numerous releases this year have looked back on his illustrious catalogue.  Universal issued The Art of the Songwriter in 6-CD and 2-CD iterations to coincide with the publication of his memoir, Real Gone Music rescued his three sublime “lost” 1974 productions for Dionne Warwick from obscurity, and Warner Music Japan reissued the near-entirety of Warwick’s Scepter and Warner Bros. tenures under the umbrella of Burt Bacharach 85th Birth Anniversary/Dionne Warwick Debut 50th Anniversary.  Two more titles have recently been added to that Japanese reissue series: The Atlantic Sound of Burt Bacharach and The Warner Sound of Burt Bacharach.  These 2-CD anthologies are both packed with rarities and familiar songs alike for a comprehensive overview of the Maestro’s recordings on the Warner family of labels.

The Warner Sound of Burt Bacharach is the more wide-ranging compilation of the two, drawing on recordings made not just for Warner Bros. Records but for Valiant, Festival, Elektra, Reprise, Scepter, and foreign labels like Italy’s CDG and Sweden’s Metronome.  This 2-CD set is arranged chronologically, with the first CD covering 1962 (Dionne Warwick’s “Don’t Make Me Over,” her only appearance on the set) to 1978 (Nicolette Larson’s “Mexican Divorce”), and the second taking in 1981 (Christopher Cross’ Oscar-winning chart-topper “Arthur’s Theme”) to 2004 (Tamia and Gerald Levert’s “Close to You”).

On the Elektra label, Love scored a hit with “My Little Red Book,” presented here in its mono single version.  The composer didn’t care for the band’s melodic liberties, but the Sunset Strip rockers’ version is today better known than the Manfred Mann original.  From the Reprise catalogue, you’ll hear the great arranger Marty Paich with a swinging instrumental version of “Promise Her Anything,” a genuine Bacharach and David rocker originally recorded by Tom Jones.  Trini Lopez’s groovy “Made in Paris” is also heard in its mono single version.  Morgana King is sultry on a Don Costa arrangement of “Walk On By.”  Buddy Greco delivers a hip “What the World Needs Now,” and Tiny Tim makes the same song his own.  Ella Fitzgerald puts her stamp on “I’ll Never Fall in Love Again,” produced like Tiny Tim’s “World” by Richard Perry.  Another production great, Wall of Sound architect Jack Nitzsche, brings a touch of class to the Paris Sisters’ dreamy “Long After Tonight is All Over.”

Numerous tracks on the first CD come from the worldwide Warner vaults.  The two stars of the original Italian production of Promises, Promises – Catherine Spaak and Johnny Dorelli – are heard in their beautiful, low-key performance of “I’ll Never Fall in Love Again” as released on the CDG label.  The Sweden Metronome label yields Svante Thuresson’s “This Guy’s In Love with You,” Siw Malmkvist’s “I Say a Little Prayer,” and one of the strangest songs in Bacharach and David’s entire catalogue, “Cross Town Bus” as sung by the Gals and Pals in English.  Australia’s Festival label – the original home of the Bee Gees – has been tapped for Noeleen Batley’s “Forgive Me (For Giving You Such a Bad Time)” and Jeff Phillips’ “Baby It’s You.”  The treasures on the Warner Bros. label proper are just as eclectic, from Liberace’s gentle “Raindrops Keep Falling on My Head” to The Watts 103rd Street Rhythm Band’s torrid “I Wake Up Crying.”  Harpers Bizarre’s “Me Japanese Boy (I Love You),” with an atmospheric Nick DeCaro arrangement, is another highlight.  The Everly Brothers truncated Bacharach’s melody to “Trains and Boats and Planes” but their harmony blend is at its peak in a 1967 recording.

The second disc of The Warner Sound emphasizes latter-day R&B as Bacharach branched out with a variety of lyricists.  Chaka Khan is heard on “Stronger Than Before” by Bacharach and Carole Bayer Sager;  Earth Wind and Fire on “Two Hearts” co-written with Philip Bailey and Maurice White; Tevin Campbell on “Don’t Say Goodbye Girl” co-written with Narada Michael Walden and Sally Jo Dakota; and Randy Crawford on “Tell It To Your Heart” from Bacharach and Tonio K.  Mari Ijima’s original version of “Is There Anybody Out There” – penned by Bacharach, John Bettis, James Ingram and Puff Johnson – is a welcome surprise; the song was recorded in 2012 by Dionne Warwick on her Now album.  Ingram is also heard with “Sing for the Children.”  On the 1993 track, co-producer/arranger Thom Bell channeled Bacharach’s classic flugelhorn sound to great effect.  Old favorites are also revisited and reinterpreted on this disc via Everything But the Girl’s “Alfie,” The Pretenders’ “The Windows of the World,” Linda Ronstadt’s “Anyone Who Had a Heart,” Anita Baker’s “The Look of Love,” guitarist Earl Klugh’s “Any Old Time of Day” and frequent Bacharach collaborator Elvis Costello’s “Please Stay.”  With big hits (“Arthur’s Theme”) alongside rarely-anthologized gems (the George Duke-produced “Let Me Be the One” performed by Marilyn Scott), there’s something for everybody here.

After the jump: check out The Atlantic Sound of Burt Bacharach!  Plus: track listings with discography and order links for both titles!

Over 44 tracks recorded between 1966 and 2010, The Atlantic Sound of Burt Bacharach chronicles the composer’s legacy on the perhaps the foremost R&B label of all time, founded by Ahmet Ertegun and Herb Abramson in 1947.  Atlantic’s leading artists were uniquely suited to interpret Bacharach’s frequently soulful music and bring out the grit in his immaculate melodies.  The first disc is devoted to Atlantic Ladies and the second to Atlantic Men and Jazz, and though both are concentrated on recordings made in the 1960s, the selections aren’t always predictable.  Atlantic Ladies focuses on the music of Aretha Franklin (four songs), Leslie Uggams (four), The Sweet Inspirations (four), Carmen McRae, Carla Thomas and Rumer (two each) with one track apiece from Patti LaBelle and The Bluebelles, Lulu, and the pairing of Stacy Lattislaw and Johnny Gill.  A couple of songs are heard in various versions – “What the World Needs Now is Love” from Thomas, The Sweet Inspirations and Uggams, and “Alfie” from The Sweet Inspirations and Rumer.  The Pakistani-born chanteuse Rumer also gets the collection’s most recent title, 2010’s warmly nostalgic “Some Lovers” from the Bacharach/Steven Sater musical of the same name.  Uggams’ other songs are among the most interesting here, with takes of “Any Old Time of Day,” “Let the Music Play” and “In the Land of Make Believe.”  The Sweet Inspirations’ “Let Me Be Lonely” is a rare recording of the passionate song also recorded by Dionne Warwick and The 5th Dimension.  (Dusty Springfield is a major omission from this disc, as her recordings – while on Atlantic in the U.S. – were made for Philips in the U.K. and are controlled in other territories by Universal.)

Atlantic Men and Jazz has a more diverse roster, though it begins with five tracks from The Drifters, all recorded between 1961 and 1963 when Bacharach’s style was finally developing into what we recognize today as “the Bacharach sound.”  Bossa nova pianist Sergio Mendes appears with a couple of cuts released on Atlantic (“Don’t Go Breaking My Heart” and “I Say a Little Prayer”) while he was making more sweet Bacharach music at A&M with Brasil ’66.  There are varied excursions into rock (Vanilla Fudge), funk (Roy Ayers), classic soul (Ben E. King, Brook Benton), jazz (Herbie Mann, Nino Tempo) and R&B group harmony (The Persuaders) among this disc’s 23 offerings.  R.B. Greaves proves he’s more than just “Take a Letter, Maria” on “Always Something There to Remind Me” from 1969, and Young-Holt Unlimited take a soulful strut through “Raindrops Keep Falling on My Head” from the next year.  Legendary Atlantic arranger Arif Mardin is represented with his own 1969 instrumental version of “Walk On By.”

Both the Warner and Atlantic volumes share similar designs, and are housed in thick jewel cases with OBI strips.  60+ page booklets include liner notes in Japanese, lyrics in both Japanese and English, and discographical information for each song (date and title of release, catalogue number, producer, chart information) in English.  Another insert has full-color images of the LPs and singles from which the tracks were derived.  Isao Kikuchi has remastered both volumes.