Welcome to this week's Release Round-Up! Randy Newman, The Randy Newman Songbook (Nonesuch) (Amazon U.S. / Amazon U.K. / Amazon Canada) The Randy Newman Songbook box set marks the first-ever combined release of all three of the legendary songwriter's piano-and-voice Songbook albums (including the new Vol. 3) recorded in 2003 and 2010 with producers Mitchell Froom and Lenny Waronker.  All songs have been resequenced as one cohesive, thematically-linked listening experience spread over 4

END_OF_DOCUMENT_TOKEN_TO_BE_REPLACED

Happy Thanksgiving!  Welcome to this week's Release Round-Up! Prince, Prince 4Ever (Warner Bros.) (Amazon U.S. / Amazon U.K. / Amazon Canada) This release actually came out on Tuesday, but it's worth a reminder here: this first posthumous collection from the late, great artist premieres one previously unreleased track, and includes a number of single versions making their CD debuts.  Prince 4Ever is a 40-track summary of The Artist's major works from his first album, 1978's For You, to

END_OF_DOCUMENT_TOKEN_TO_BE_REPLACED

It may be Friday the 13th, but today's choice releases are hardly scary, with box sets, archival releases, new music from veteran artists, and much, much more! Aretha Franklin, The Atlantic Albums Collection (Atlantic/Rhino) (Amazon U.S. / Amazon U.K.) This 19-CD box set brings together 16 of the Queen of Soul's Atlantic albums as previously released on CD including the deluxe 2-CD Live at Fillmore East, the 2-CD Rare & Unreleased Recordings From The Golden Reign Of The Queen Of

END_OF_DOCUMENT_TOKEN_TO_BE_REPLACED

The ever-prolific Neil Young is following up his latest studio album The Monsanto Years with another dip into his fabled Archives.  Bluenote Café is the title of his Archives Performance Series Volume 11, due in 2-CD and 4-LP editions from Reprise Records on November 13. Bluenote Café takes its name from the horn-powered band which backed Neil on his 1987-1988 tour before and after the April '88 release of the studio album This Note's for You (originally credited to Neil Young and the

END_OF_DOCUMENT_TOKEN_TO_BE_REPLACED

Today, Varese Vintage releases Lotta Love: The Very Best of Nicolette Larson, celebrating the life and career of the silken-voiced pop singer who died at the tragically young age of 45 in 1997.  This 16-track anthology, culled from her years with Warner Bros. Records and featuring duets with Emmylou Harris, Steve Goodman and Michael McDonald, is a welcome reminder of Larson's versatile gifts in the genres of pop, country and folk - and we would like to give you a chance to WIN ONE OF TEN COPIES

END_OF_DOCUMENT_TOKEN_TO_BE_REPLACED

Welcome to our final Tuesday Release Round-Up - and it's a doozy!  As many of you know, the record industry will next week adopt a universal Friday release day.  No releases are scheduled for Tuesday, July 7; instead, Friday, July 10 is the date!  DVDs and Blu-rays will, for the foreseeable future, remain released on Tuesdays.  We'll resume with a new Release Round-Up on Friday, July 10! Ronny and the Daytonas, The Complete Recordings (2-CD Set) (Amazon U.S. / Amazon U.K.) / The

END_OF_DOCUMENT_TOKEN_TO_BE_REPLACED

Two legendary artists headline a new anthology arriving on June 16, 2015 from Legacy Recordings.  Dylan, Cash and the Nashville Cats: A New Music City, a 2-CD, 36-track compilation, serves as an audio companion and soundtrack to the exhibit of the same name currently on display at Nashville's Country Music Hall of Fame through December 31, 2016.  Like the exhibit, this new release explores the timeless sounds created at the intersection of country, folk and rock in Nashville between, roughly

END_OF_DOCUMENT_TOKEN_TO_BE_REPLACED

I. See What a Love Can Do Nils Lofgren was just seventeen years old when Neil Young called upon him to play piano on his third solo album, After the Gold Rush. The guitarist, songwriter, multi-instrumentalist and onetime child prodigy joined Jack Nitzsche and the men of Crazy Horse – Danny Whitten, Billy Talbot and Ralph Molina – on an instrument which was largely unfamiliar to him. He added the understated, stark and raw piano parts that Young and producer David Briggs were looking for, and

END_OF_DOCUMENT_TOKEN_TO_BE_REPLACED

Bob Dylan’s 30th Anniversary Concert Celebration, held on October 16, 1992 at New York’s Madison Square Garden to mark Dylan’s Columbia Records debut, could have been a valedictory.  The 51-year old honoree and participant was nearly at the halfway point of a self-imposed sabbatical from writing and recording original songs; it would last seven years, from 1990 to 1997.  He had not had an album reach the Top 20 of the Billboard 200 since 1983’s Infidels and hadn’t cracked the Top 5 since 1979’s

END_OF_DOCUMENT_TOKEN_TO_BE_REPLACED

He's called it "the worst record I ever made," but Neil Young's putting his 1973 live album Time Fades Away back into print for only the second time, as part of a limited box set for Record Store Day. The Neil Young Official Release Series Discs 5-8 box set, limited to 3,500 copies at participating independent retailers on this year's Record Store Day events on April 19, will feature 180-gram reissues of Time Fades Away, On the Beach (1974), Tonight's the Night (1975) and Zuma (1975), newly

END_OF_DOCUMENT_TOKEN_TO_BE_REPLACED

Eric Clapton, Give Me Strength: The '74/'75 Recordings (Polydor/UMe) One of Clapton's most prolific periods is revisited with this six-disc box, featuring expanded versions of 461 Ocean Boulevard (1974), There's One in Every Crowd (1975), a remixed and expanded double-disc version of live album E.C. Was Here (1975), a disc of sessions at Criteria Studios with blues legend Freddie King and a Blu-Ray featuring new 5.1 surround and original quadrophonic mixes.  (Amazon U.S. / Amazon U.K.) Ella

END_OF_DOCUMENT_TOKEN_TO_BE_REPLACED

No, there’s still not a date on the calendar for the much-talked-about release of Crosby, Stills, Nash and Young’s 1974 concert tapes last scheduled for August 27 and currently anticipating release next year.  (Or so it’s been reported.)  But Neil Young has a solo live release scheduled for December 10 that should whet appetites for that CSNY project and excite fans and collectors in its own right, too.  Young’s camp has confirmed Live at the Cellar Door, the latest installment of Young's

END_OF_DOCUMENT_TOKEN_TO_BE_REPLACED

What's the contender for the title of Longest-gestating Music Box Set?  That dubious honor would have to go to Neil Young's Archives, Volume 1, bandied about since the 1980s and not released until 2009.  Available as 10 Blu-rays, 10 DVDs or 8 CDs, Archives provided an immersive journey deep into Young's vaults, and it picked up a Grammy Award for Art Direction in 2010.  In conjunction with the massive box (supposedly the first of five such sets), Young has branded a number of his catalogue

END_OF_DOCUMENT_TOKEN_TO_BE_REPLACED

Well, Record Store Day is finally upon us!  Tomorrow, Saturday, April 21, music fans and collectors will descend upon their local independent record stores to celebrate both the sounds on those black platters and the cherished physical shopping environments alike.  As Record Store Day 2012 will offer a typically eclectic array of limited edition releases (primarily on vinyl but also some on CD, too!) from many of our favorite artists here at Second Disc HQ, we thought we would take a moment to

END_OF_DOCUMENT_TOKEN_TO_BE_REPLACED 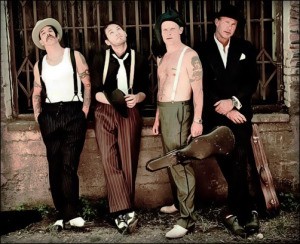 How do the Red Hot Chili Peppers celebrate their graduation to legend status per their recent Rock and Roll Hall of Fame induction? They pay tribute to the ones that came before on a new digital EP that includes a handful of B-sides paying tribute to their favorite fellow inductees. We Salute You, to be released May 1, includes covers of Dion and The Belmonts, The Ramones, The Stooges, Neil Young, The Beach Boys and David Bowie, all of which can certainly be argued as influences for the

END_OF_DOCUMENT_TOKEN_TO_BE_REPLACED

Dennis Wilson did it in 1977.  Carl Wilson did it in 1981.  So did Mike Love.  Brian Wilson waited until 1988.  But it wasn’t until 2010 that Al Jardine released his first solo studio album.  Entitled A Postcard from California, Jardine had to content himself with a limited release via Amazon’s MOD (Made on Demand) system.  Now, with the surviving Beach Boys reuniting for a hotly-anticipated 50th anniversary tour beginning later this month and gearing up for the band’s first studio album since

END_OF_DOCUMENT_TOKEN_TO_BE_REPLACED

The hits just keep on coming! The latest part of our TSD Buyers Guide, which counts the reissues of the albums in Rolling Stone's 100 greatest albums of all time (as selected in 2003), features some classic hard rock and soul and a lot of CD pressings (if not as many bonus tracks in this batch). We begin below with one of the heaviest albums of all time! 75. Led Zeppelin, Led Zeppelin II (Atlantic, 1969) Led Zeppelin II is arguably the band's heaviest and rawest work in studio, in part

END_OF_DOCUMENT_TOKEN_TO_BE_REPLACED

It's almost the weekend, and we've got the perfect set of tunes to rock your Saturday and Sunday!  It's Part 5 of our first-ever official Second Disc Buyers Guide, in which we look at the 100 greatest albums of all time, as selected by Rolling Stone in 2003, through the filter of when and how these classic albums have been reissued, remastered and repackaged. If you've ever wondered to yourself which versions of these albums to buy for certain bonus tracks and the like, we're your one-stop

END_OF_DOCUMENT_TOKEN_TO_BE_REPLACED

Who but Neil Young could have brought The Red Hot Chili Peppers, Sonic Youth, Ben Harper, Eddie Vedder, Paul McCartney, Tony Bennett, and Los Lonely Boys together on the same stage?  Though Young is an easy target for what can appear as a capricious attitude towards his back catalogue – announcing, then delaying or cancelling titles with alarming frequency – one aspect of the man’s great legacy cannot be in dispute, and that is his philanthropy.  Since 1986, Young and his wife Pegi have offered

END_OF_DOCUMENT_TOKEN_TO_BE_REPLACED

Are you ready for the country? In 1984, Neil Young certainly was.  His Geffen Records debut, Trans, had just a couple of years earlier plunged Young into a “high tech” world of vocoders, synthesizers and dance beats while the singer ruminated about “The Computer Age,” “Computer Cowboy” and “Transformer Man.”  1983’s Everybody’s Rockin’ was an exercise in recreating rockabilly, with Young’s band billed as The Shocking Pinks.  Originals like “Kinda Fonda Wanda” blended right in with covers of