Madonna, You Can Dance (Single Edits) / Rain (Warner/Rhino) Dance: iTunes / Amazon Rain: iTunes / Amazon Rhino keeps digitally uploading intriguing stuff from Madonna's single and remix catalogue, and this month saw two such releases: first, a bundle of mixes surrounding the Erotica favorite "Rain," then this week, to celebrate the 35th anniversary of remix album You Can Dance, an upload of the rare promo version that found all the tracks unmixed and edited to single-ready

END_OF_DOCUMENT_TOKEN_TO_BE_REPLACED

Welcome to The Weekend Stream, a relaxing weekly review of notable digital-only catalogue titles. There may be no CD or vinyl, but there's plenty of great new/old music to discover! And after a week away, you better believe we're coming in hot! Billy Joel, 50 Years of the Piano Man (Columbia/Legacy) (Apple Music / Amazon) On the surface, this 50-track digital compilation-cum-playlist looks like a typical algorithmic survey of Joel's five-decade career, with all the great radio hits rising to

END_OF_DOCUMENT_TOKEN_TO_BE_REPLACED

This is a public service announcement...with bonus tracks! Legacy Recordings will release a 2CD or 3LP expansion of The Clash's Combat Rock for its 40th anniversary. The album comes with a bonus disc of 12 rare and unreleased tracks curated by the band's surviving members. As the follow-up to the sprawling triple album Sandinista! (1980), the fifth album from "The Only Band That Matters" found the group at a creative crossroads. Guitarist Mick Jones found himself feeling estranged from his

END_OF_DOCUMENT_TOKEN_TO_BE_REPLACED

After last week's initial announcement, we'll be periodically continuing our look at the releases for the upcoming Record Store Day events on June 12 and July 17.  Today, we're focusing on our friends at Legacy Recordings.  The label has a robust slate for both Drops with many familiar faces including Janis Joplin, Bob Dylan, Kenny Loggins, Prince, Miles Davis, and the legendary artists and musicians of Philadelphia International Records.  Visit RecordStoreDay.com for a list of participating

END_OF_DOCUMENT_TOKEN_TO_BE_REPLACED

When The Clash released their third studio effort, London Calling in December 1979, they unleashed an instant classic. The double album -- with its diverse blend of punk, reggae, rockabilly, ska, R&B and jazz -- was quickly heralded as a high-water mark for the band and for punk music. John Rockwell of The New York Times wrote in 1980 that London Calling "reveals depths of invention and creativity barely suggested by the band's previous work." The same yearm Down Beat 's Michael Goldberg

END_OF_DOCUMENT_TOKEN_TO_BE_REPLACED

When it comes to Joe Strummer, 001 is the number to watch.  That's the name of the upcoming box set that shines a deserved light on the late Clash frontman's work outside of his famous band - solo, with former bandmate Mick Jones, and with his 101ers and The Mescaleros.  001 arrives on September 28 from Ignition Records in an array of formats, including 2CD, 2CD Deluxe, 4LP, and a 2CD/4LP/7"/Cassette Super Deluxe edition. The first CD of 001 compiles 20 eclectic, previously released sides

END_OF_DOCUMENT_TOKEN_TO_BE_REPLACED

If you've been following these pages for the past few weeks, you've likely noticed an awful lot of coverage about Record Store Day!  Well, the day is nearly here!   Tomorrow, Saturday, April 21, music fans and collectors will flock to their local independent record stores to celebrate both the sounds on those round black platters and the very concept of shopping in a physical retail environment. To many of us, both are a way of life.  We're doubly excited this year because one special title was

END_OF_DOCUMENT_TOKEN_TO_BE_REPLACED

With the last two weeks of the year so light on catalogue titles, we figured we'd combine it all into one post. Below you'll find two new titles for this week, and two for the next! The Pogues, 30 Years (Rhino U.K.) Here, in one box, is all of the Irish folk-rockers' original albums, including new mixes of debut Red Roses for Me and Peace and Love, plus a bonus unreleased live show from 1991 with Joe Strummer of The Clash assuming lead vocal duties. (Amazon U.K. / Amazon U.S.) Boz Scaggs, Boz

END_OF_DOCUMENT_TOKEN_TO_BE_REPLACED

Celtic rockers The Pogues are releasing a new box set that collects all of their studio albums - two newly-remixed just for this release - and an unreleased live album with a very special frontman. Led by unforgettable frontman Shane Macgowan, The Pogues deftly combined the raucous traditions of traditional Celtic folk songs and sharp-edged punk rock, gaining a considerable live following when opening for The Clash on one of their last tours. A contract with Stiff Records followed, yielding Red

END_OF_DOCUMENT_TOKEN_TO_BE_REPLACED

It's that time of year again!  Though Black Friday has taken a backseat in recent years to the once-unheard-of Thanksgiving Day sales, the folks at Record Store Day still hold the day after Thanksgiving in high esteem.  News has begun to trickle out about this year's RSD Back to Black Friday exclusives, and the team at Legacy has certainly put together a collection of special vinyl releases - and a handful of CDs, too - that look back to recent releases from the label and forward to future

END_OF_DOCUMENT_TOKEN_TO_BE_REPLACED

Ain’t no doubt about it: Ellen Foley achieved classic rock immortality via her role on “Paradise by the Dashboard Light,” opposite Meat Loaf on his 1977 album Bat Out of Hell.  Foley was the girl “glowing like the metal on the edge of a knife” in Jim Steinman’s rock opera in miniature, with Meat Loaf as the boy “praying for the end of time” and the end of their time together.  All these years later, Foley and the former Marvin Lee Aday are together again - on CD shelves, at least, thanks to two

END_OF_DOCUMENT_TOKEN_TO_BE_REPLACED

Even the name of The Clash was aggressive.  With their 1977 debut album, Joe Strummer, Mick Jones, Paul Simonon and Terry Chimes (soon to depart the band) made a fast and furious attack on rock complacency.  Punk, after all, was the music heard ‘round the world when it re-lit a fire in the belly of rock-and-roll that had lain dormant in an era of increasingly complex, often progressive rock (sans the roll) in the 1970s.  And at the vanguard of that initial wave of English punk was, inevitably,

END_OF_DOCUMENT_TOKEN_TO_BE_REPLACED 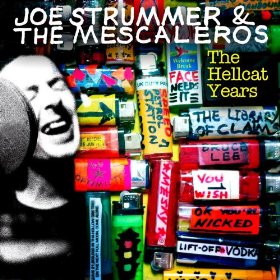 In celebration of what would have been Joe Strummer's 60th birthday this year - and, just as sadly, the 10th anniversary of his passing this coming December - the Clash frontman's three albums with latter-day solo band The Mescaleros have received the deluxe treatment both physically and digitally. At the end of August, Hellcat/Epitaph Records released a digital box set, Joe Strummer & The Mescaleros: The Hellcat Years. This 57-track box set contains all three remastered Mescaleros LPs -

END_OF_DOCUMENT_TOKEN_TO_BE_REPLACED

Well, Record Store Day is finally upon us!  Tomorrow, Saturday, April 21, music fans and collectors will descend upon their local independent record stores to celebrate both the sounds on those black platters and the cherished physical shopping environments alike.  As Record Store Day 2012 will offer a typically eclectic array of limited edition releases (primarily on vinyl but also some on CD, too!) from many of our favorite artists here at Second Disc HQ, we thought we would take a moment to

END_OF_DOCUMENT_TOKEN_TO_BE_REPLACED

Here at Second Disc HQ, we're eagerly anticipating April 21, or Record Store Day, the industry-wide celebration of all things vinyl (and a few CDs, too!).  Record Store Day, now in its fifth year, gives shoppers the chance to interact with big crowds of fellow music enthusiasts in the brick-and-mortar retail environment cherished by so many of us.  Legacy Recordings has announced its impressive line-up of limited edition releases that will line the shelves of your favorite independent music

END_OF_DOCUMENT_TOKEN_TO_BE_REPLACED

It's the penultimate entry in our list of Rolling Stone's greatest albums of all time, as seen through the reissues that have filled our shelves for years. We've got some heavy hitters here: Beatles, Stones, Dylan - plus what may be the greatest punk and R&B albums ever. 10. The Beatles, The Beatles (Apple, 1968) The double-LP the world knows mostly by three other words - "The White Album" - was difficult and unusual inside and out. Most of the songs were conceived during an ultimately

END_OF_DOCUMENT_TOKEN_TO_BE_REPLACED

It's almost the weekend, and we've got the perfect set of tunes to rock your Saturday and Sunday!  It's Part 5 of our first-ever official Second Disc Buyers Guide, in which we look at the 100 greatest albums of all time, as selected by Rolling Stone in 2003, through the filter of when and how these classic albums have been reissued, remastered and repackaged. If you've ever wondered to yourself which versions of these albums to buy for certain bonus tracks and the like, we're your one-stop

END_OF_DOCUMENT_TOKEN_TO_BE_REPLACED

Where were you when you first heard The Clash? If you can't answer that question because you've never heard them, then consider this your Christmas present. The London-based punk band accomplished much in their decade-long tenure, including some of the best albums of the genre. Though they enjoyed the fruits of a major label, they stayed true to their ethos, keeping prices low for albums, tickets and souvenirs (reportedly, the band forfeited royalties on sprawling triple-album Sandinista! in