We're close to that most wonderful time of the year, folks! No, not Christmas, but - well, yeah, I guess Christmas is closer than we'd all wish it would be. But ANYWAY, the wonderful time I was alluding to is Record Store Day's Black Friday event. The day after Thanksgiving, our beloved local independent record stores join forces with major and independent labels alike to release special exclusive treats as a way of thanking us for patronizing their businesses. While a full list of RSD

END_OF_DOCUMENT_TOKEN_TO_BE_REPLACED

Update (10/10/2012): The official Record Store Day Facebook page just confirmed a  new date for the corrected, repressed single is October 22. Check your local stores for more details! Original post (10/5/2012): Bad news for anyone looking for EMI's repressed Beatles 50th anniversary single: you're not going to find it anytime soon. The label announced in a statement earlier this week that the single would be pulled from the release schedule. Embarrassingly, EMI cites a "faulty" pressing

END_OF_DOCUMENT_TOKEN_TO_BE_REPLACED 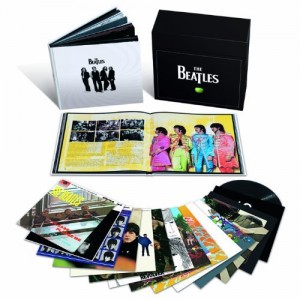 The wait is over. This holiday season, vinyl enthusiasts and Beatlemaniacs everywhere will finally have a chance to hear 2009's long-awaited Beatles remasters on 180-gram vinyl. All of the albums in The Fab Four's official discography - 1963's Please Please Me and With The Beatles, 1964's A Hard Day's Night and Beatles for Sale, 1965's Help! and Rubber Soul, 1966's Revolver, 1967's Sgt. Pepper's Lonely Hearts Club Band and the U.S. Magical Mystery Tour LP, 1968's self-titled "White Album,"

END_OF_DOCUMENT_TOKEN_TO_BE_REPLACED

The term "record store" (two rather hallowed words in these parts!) has long been used to describe those stores that sell music, even well into the age of the CD, and now, the digital download.  But lately, record store walls have been lined with more and more actual vinyl records.  In 2011, more records were purchased than in any other year in the past two decades, with sales up 36 percent over 2010, to a not-too-shabby 3.9 million. Sales for 2012 are likely to best that number.  Since its

END_OF_DOCUMENT_TOKEN_TO_BE_REPLACED

Light in the Attic Gets Funky in the Country with Bobby Darin, Mac Davis, Link Wray, Bobbie Gentry and More

What the hell is "Country Funk," you ask? That's the question being posed by Light in the Attic on its new compilation, titled (what else?) Country Funk: 1969-1975.  The label goes on to answer, in part, of the "inherently defiant genre": "the style encompasses the elation of gospel with the sexual thrust of the blues, country hoedown harmony with inner city grit.  It is alternately playful and melancholic, slow jammin' and booty shakin'.  It is both studio slick and barroom raw."  Well,

END_OF_DOCUMENT_TOKEN_TO_BE_REPLACED

When Jellyfish's Live at Bogart's was recorded on February 21, 1991, did anybody realize that neither the band nor the venue were long for this world?  On December 2, 1993, The Los Angeles Times lamented the closure of the Long Beach, California club, calling it a "mighty blow" to the local music community.  Yet Bogart's actually outlasted the first iteration of the band that hailed from miles up north in the San Francisco Bay Area.  Andy Sturmer (drums/vocals), Roger Joseph Manning Jr.

END_OF_DOCUMENT_TOKEN_TO_BE_REPLACED

We're gonna keep this one short and sweet, dear boys and long-haired ladies.  Yes, the oft-rumored Paul McCartney Archive Collection of Paul and Linda McCartney's 1971 album Ram is very close to becoming a reality.  On March 22, it was officially announced that Ram will be reissued in multiple formats on May 22.  But one of those formats will be a bit surprising to collectors of previous Archive Collection titles.  It appears that Ram will not follow the hardcover book format of those past

END_OF_DOCUMENT_TOKEN_TO_BE_REPLACED

Nobody could accuse the fine folks at Omnivore Recordings of not living up to the label's name!  After all, "omnivore" is derived from the Latin for "all" and "everything."   And Omnivore's recently announced slate of upcoming releases certainly qualifies as encompassing music from an incredibly wide variety of genres and eras.  The label's packed line-up for May, June and July takes in legends from the world of comedy and country-and-western plus new wave and power pop pioneers! Two releases

END_OF_DOCUMENT_TOKEN_TO_BE_REPLACED

Earlier this week, Walt Disney World welcomed back an old friend: Florida's Orange Bird, absent from the World since 1987!  We thought this would be a great time to bring back the Friday Feature, which is usually dedicated to film soundtracks but occasionally takes a Disney diversion!  Today, we're turning the spotlight on the little Orange Bird's one moment of recorded glory, on which he was joined by a future Oscar winner! Move over, Jose, Fritz and Pierre.  There's a new bird in

END_OF_DOCUMENT_TOKEN_TO_BE_REPLACED

Though Wes Montgomery died in 1968 aged just 45, the Indiana-born jazz guitarist made such an impression that his body of work has influenced an entire generation of guitar players, from George Benson to Pat Metheny, Jimi Hendrix and everyone in between.  In a period of roughly ten years, Montgomery had three distinct periods at different labels: Riverside (1959-1964), Verve (1964-1966) and A&M (1967-1968), the latter two under the aegis of producer Creed Taylor.  Maverick producer Taylor

END_OF_DOCUMENT_TOKEN_TO_BE_REPLACED

Anyone Who Had a Heart: Shelby Lynne's Dusty Springfield Tribute, Reissued

When I Am Shelby Lynne appeared on the Mercury label in 2000, its eponymous singer finally hit on an approach that synthesized her varied influences (country, soul, R&B, rock-and-roll) into a relevant and contemporary whole. Lynne picked up the Best New Artist Grammy, despite having released her first album in 1989, and the album’s title indicated that, finally, the artist knew who she was, and was ready to share her music with the world. Fast-forward eight years, and a number of albums

END_OF_DOCUMENT_TOKEN_TO_BE_REPLACED

It was hard not to worry about Rhino for awhile. Since the new year kicked off, things have been eerily quiet from the venerable label and catalogue arm of Warner Music Group (currently prepping for a major reorganization). Outside of the largesse of the Europe '72 box set from The Grateful Dead and a few soundtrack selections, all was quiet. Now, one of Warner's most enduring catalogue artists looks to be getting another reissue: hot off the presses, Rhino's announced a 40th anniversary